Cotswold Wildlife Park is celebrating the birth of its first baby White Rhino in its 43-year history.

The baby’s still not been named – but animal experts say it’s in good health.
The calf was born to first time parents Nancy and Monty, who are both seven years old.
Cotswold Wildlife Park curator, Jamie Craig, said: “It is very early days and Nancy is a first time mum. “We all have our fingers crossed as calves can be very vulnerable for a while after birth.”
Female rhinos only reproduce every two-and-a-half years, so the window of opportunity for a successful pregnancy is limited.
White Rhinos were once the rarest subspecies of rhino – and were on the verge of extinction.
At one point it was believed there were only 20 to 50 animals remaining in their native African homeland.
They’re now the most common of the five rhino subspecies – due to a major campaign to save them.
But they are now under threat again because of increased poaching the last three years, driven by demand for rhino horn from the traditional medicine market of China and the Far East.
The new calf is now settling into its home in the large paddock at Cotswold Wildlife Park that the animals share with a herd of zebras. 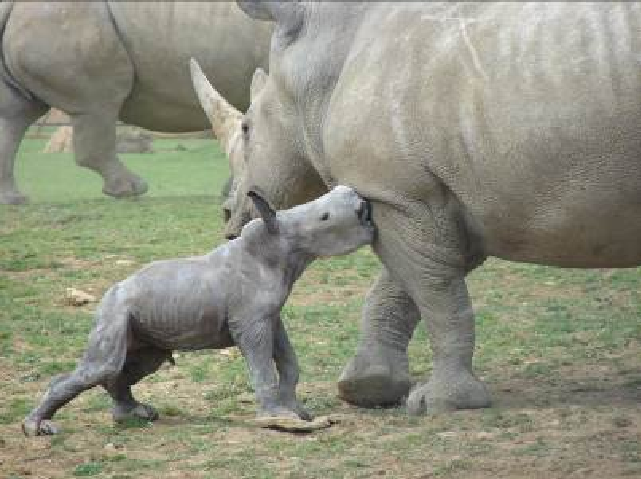