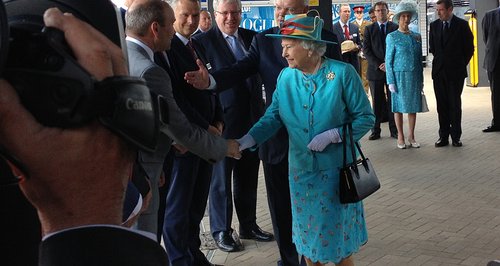 Sweltering crowds braved the heatwave to see the Queen officially open a £900 million redevelopment of one of the UK's busiest stations.

Twenty-five years ago the Queen was at Reading to open the new station in the Berkshire town.

Today, resplendent in a kingfisher blue silk dress with matching hat, the Queen was back to tour the vastly-improved station, which is a key stop on routes out of London to the West of England.

Arriving on a scheduled First Great Western train from Paddington station in London, the Queen was met by the Lord Lieutenant of Berkshire, the Hon Mary Bayliss.

After meeting dignitaries including Transport Secretary Patrick McLoughlin, the Queen officially named what is being dubbed a ''factory on wheels'' - a High Output Plant system (Hops) train, which will dramatically reduce the time it will take to electrify the Great Western rail route.

As trains whizzed through the station, which remained opened throughout the ceremony, the Queen was presented with a bouquet of flowers by six-year-old Eadie Jackson, from Cirencester, Gloucestershire, whose father, Matt, is the Reading station area development project manager.

Also presenting bouquets were Molly Weeden, 13, and her 11-year-old sister Hannah, from Marlborough, Wiltshire. They were watched by their father, Jim Weeden, who is Network Rail's Thames Valley project director.