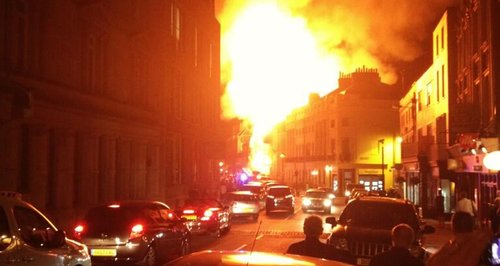 Police want to speak to a man who may be able to help them with their investigation into a fire which destroyed a house in Windsor.

No-one was injured in the fire which started before 22:00 on (Wednesday May 7) in Park Street and was tackled by more than 80 firefighters.

The terraced property, opposite the Two Brewers pub, had been undergoing renovation work and was surrounded by scaffolding.

The upper floors of the building collapsed along with the scaffolding, with 12 people from properties nearby moved into temporary accommodation.

Crews came from Berkshire, Buckinghamshire, Oxfordshire, London and Surrey to fight the fire which was brought under control at around 3am.

Thames Valley Police would like to speak to the man in the hooded top who appears in the picture (left). He is not a suspect in the investigation, but he might be able to assist police with their enquiries.

Investigating officer, Det Sgt John Slater said: "We are keeping an open mind as to the cause of the fire, which we are trying to establish alongside our partners at the fire service."