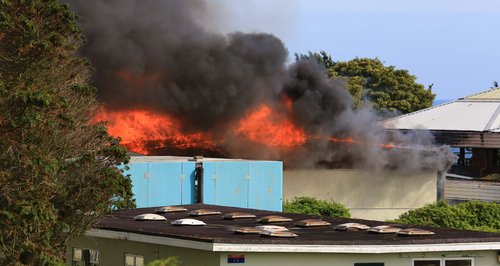 Three male youths have been arrested on suspicious of arson after a fire at a disused holiday park at Wall Park Road, Brixham, which has resulted in substantial damage to part of the property.

Emergency services attended the location just before 5pm on Thursday 5th of June 2014 following numerous reports from the public that there was large blaze and heavy smoke. It's thought felt on the flat roof from the top of the arcade made the smoke toxic.

A huge plume of thick black smoke could been seen as far away as Totnes and Exmouth.

Road closures were put in place and warnings passed to properties in the immediate vicinity to keep windows closed.

Roads were re-opened at approximately 9.45pm this evening.

Police are treating the fire as suspicious and any witnesses or persons who have information which will assist the police with their investigation into this incident are asked to ring 101, and quote incident 555 05/06/2014.