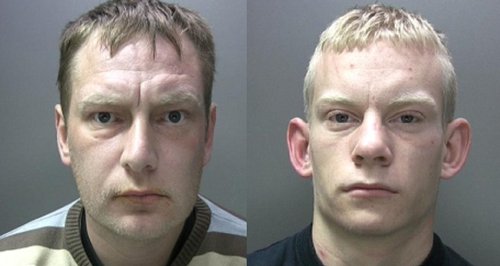 Two Coventry brothers have been jailed for a robbery on convenience store that saw a shopkeeper stabbed.

Two brothers have been jailed for a total of 12 years for a knife-point shop robbery after being trapped by high-tech CCTV that alerted detectives to minute clothing defects.

Gareth and Rocky Fawkner (pictured in the black t-shirt) wore ski masks to obscure their identity when jumping the counter at a Coventry convenience store before escaping on a moped clinging to a duvet cover stuffed with cigarettes and alcohol.
However, the siblings hadn’t banked on the Henley Green One Stop, in Broad Park Road, being fitted with digital CCTV that provided police with vital clues that would eventually lead to their downfall.
A jacket worn by younger brother Rocky, 18, during the raid had a small tear on the side − a detail picked up by the cameras − and when police later raided their family home in Ashorn Close, Wood End, a top with the same defect was found stashed in a kitchen cupboard.
Gareth was seen wearing a distinctive blue and white tracksuit and, when officers checked the 29-year-old’s police record, they discovered he’d worn an identical top when brought into custody six weeks earlier on an assault matter.
Officers searched an address linked to him in Wappenbury Road, Wood End, and uncovered a blue hoodie from a bin − which featured the same white trim fraying noted from the CCTV footage − and Nike trainers like those worn during the robbery hidden in a tumble dryer.
Body ‘mapping’ experts also assessed the robbers caught on camera and concluded they matched the size and build of the Fawkners.
Both denied the 30 October robbery last year, plus another in Arena Park sports outlet Decathlon eight days earlier when thieves rode off on a £430 display bike, but were found guilty by a jury.
And at Warwick Crown Court Gareth Fawkner − who was on licence for a 2010 shop robbery at the time of last year’s offences − was jailed for six years while Fawkner Jnr was also jailed for six years.
West Midlands Police Detective Inspector Nick Dale, said: “This case highlights the futility of many crimes − people risking long spells behind bars for very little gain.
“The Falkner brothers have rightly been handed significant custodial sentences: they used a disproportionate level of violence, far more than was needed to achieve their aims − and yet all they got away with was a mountain bike, cigarettes and bottles alcohol.
“They wore masks to commit the robberies and left no forensic evidence − but diligent detective work gave them little option but to plead guilty. Wearing a face covering does not mean we can’t identify offenders and get them sent to jail."
The pair threatened a store manager and security guard with knives when their request to “test ride" a mountain bike at the Decathlon store on 22 October was refused − but their violence escalated eight days later when they stormed the One Stop armed with 12-inch kitchen knives.
Rocky Fawkner stabbed the defenceless shop-keeper in the back and shoulder − and was dragged off by his older brother, preventing more serious injuries − before they fled with cigarettes and booze after failing to prise open the till.
Police intelligence suggested the brothers could be involved and, when addresses in Wappenbury Road and Ashorn Close, Wood End, were searched on November 2 they were arrested and vital clothing evidence recovered.
Det Insp Dale, added: “They targeted amenities in their own neighbourhood and their actions left local people shocked and disgusted. Communities should not have to tolerate this sort of crime; anyone with information about people committing this sort of offence, or who is dealing in stolen goods, should tell us so we can take action."
Gareth Fawkner was jailed for five years and four months in July 2010 for an armed shop robbery that April when, armed with a pistol, he attacked staff and stole cigarettes and drink from a Co-Op store in Walsgrave’s Woodway Lane.