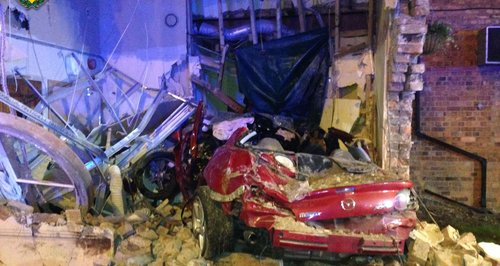 A man has crashed into the toilets of a pub in Cannock after his car left the A5 overnight.

His vehicle travelled over a wall before becoming embedded in the Longford House Beefeater pub.

The crash trapped the driver and emergency blood supplies had to be brought to the scene on Watling Street, Cannock.

"Crews arrived to find a car that had left the road, travelled over a wall and entered the toilets of the Longford House Beefeater public house.

"The car was embedded in the building and the man driving the car was significantly trapped.

"The man, believed to be in his late 30s, continued to receive treatment to his leg injuries for the 90 minutes that he was trapped.''

Having been freed he was taken by ambulance to University Hospital Major Trauma Unit for further treatment.

The spokesman finished his statement by saying: "Considering the damage to the car and the extensive damage to the building, it is extremely fortunate no one was more seriously or fatally injured in the crash."