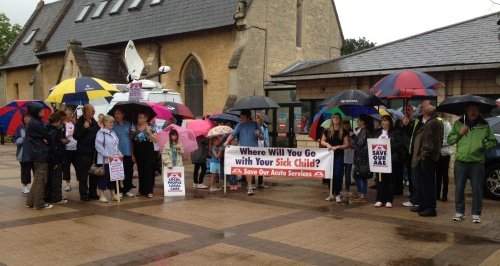 The hospital will keep its current part-time accident and emergency department but will lose other services in a major shake-up.

Trust Special Administrators (TSA), appointed by the Department of Health in April, said in their report outlining the proposals that ''there is no alternative but to make significant change'' at Stafford and neighbouring Cannock Chase Hospital.

The recommendations, which will now be subject to public consultation, means Stafford Hospital's A&E department which shuts between 10pm and 8am has escaped the cuts.

However, major emergency surgery and most trauma care, neonatal services and paediatric inpatient services - with the exception of its assessment unit, would all be moved to other hospitals in the region.

The consultation starts on August 6, and is running until October 1.

The TSA said their recommendations would mean 91% of patients currently using services would still be accessing care at the hospitals if the changes went ahead.

Among services which are proposed to stay at Stafford are elective surgery, adult inpatient care, as well as out-patient and diagnostic appointments, all of which will be largely unaffected by the shake-up.

Healthcare currently provided at Cannock Chase Hospital should also stay as it is, according to the administrators' recommendations.

The report's authors say that without major change ''future local patient safety is at stake'' pointing to the trust's small size as one reason why care at the trust in its current form cannot safely continue, long-term.

It is also proposing the trust is dissolved and the hospitals be run by neighbouring trusts, in a bid to save money.

Stafford Hospital was the focus of a major public inquiry after it was found poor care may have led to the deaths of hundreds of patients as a result of maltreatment and neglect.

The Francis Inquiry highlighted ''appalling and unnecessary suffering of hundreds of people'' under the trust's care, with some patients left lying in their own faeces for days, forced to drink water from vases or given the wrong medication.

The administrators said smaller trusts like Mid Staffordshire can neither hire or retain enough specialist doctors to give patients the proper standard of clinical care, while the NHS nationally is already moving towards a model providing larger specialist centres.

Administrators were appointed in April after an independent review on behalf of health watchdog Monitor concluded the trust was ''neither clinically nor financially sustainable'' in the long term.

Last year, the Department of Health had to give the trust £20 million to maintain patient service, with the report's authors stating ''the trust is already spending far more than it earns''.

The TSA came up with its draft recommendations after discussions with patient groups, the public and clinicians including hospital trusts in Stoke-on-Trent, Wolverhampton, and the local Clinical Commissioning Groups (CCGs) - which buy in health services for the area.

If the proposals go ahead, it is anticipated the services identified to be migrated from Stafford Hospital will have moved across to neighbouring hospitals in the region within two or three years.

Those services will instead be provided in the main by the University of North Staffordshire NHS Trust, and The Royal Wolverhampton Hospitals NHS Trust, although the TSA has identified other healthcare providers interested in taking on some aspects of care.