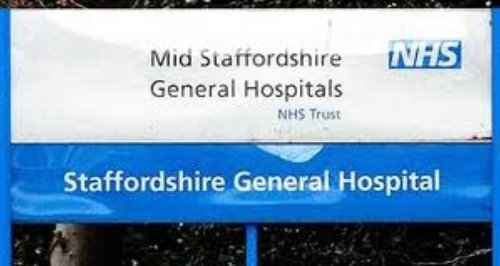 Some horrific cases were revealed from patients left soiled in their beds to people being so thirsty they had to drink water from a vase of flowers.

''My sister wouldn't of had to have gone to the morgue the day after she died and picked the dirt out of her hair. Now I've got to live with that for the rest of my life''

But Julie Bailey who started campaign group Cure the NHS after her mum died there in 2007 wanted a full Public Inquiry:

Health Secretary Jeremy Hunt gave this reaction at the time: ''Many terrible things happened at Mid Staffs in what has rightly been described as the NHS' darkest hour. ''

''When people have suffered on this scale and died unnecessarily, our greatest responsibility lies not in our words but in our actions''

Well action was taken with the Trust being put into administration last April and health regulator Monitor putting forward proposals in December to dissolve the Trust.

It means Maternity services, paediatrics and critical care will be downgraded with high risk patients treated at Stoke.

''All the other hospitals are just too far to travel, if you're in pain or worse it's more than half an hour on a decnet run, if you get stuck in traffic it's much further than that''