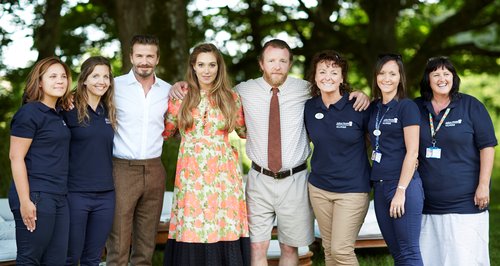 The children’s hospice charity Julia's House, which already offers home-based community care in South Wiltshire, is to build a new hospice in a central location in the County.

The charity is now looking to extend its support to other families with life-limited children by building them a small, dedicated hospice from which to roll out a county-wide care service.

Thanks to private fundraising by patrons, most notably the film director Guy Ritchie and his fiancée Jacqui Ainsley, Julia’s House now has nearly half of the £3 million needed to build a hospice. A public appeal will be launched in Wiltshire to raise the remaining funds.

The charity will be looking for a central location to make the new hospice accessible to as many Wiltshire families as possible. It is hoped to be able to open the hospice within two to three years. Among the services on offer will be respite and end of life care.

“We are announcing this publicly now, and will use the time until building starts to develop public fundraising in Wiltshire just as we did in Dorset from the Dorset public. Many other hospice charities cover more than one county in this way. Having carefully researched the needs and our capability, we believe that we can and should reach out to children and families in Wiltshire, and that we can do so without lessening the care we provide in Dorset.”

Mr Edwards said that since launching the initial home-based service in South Wiltshire staff had been surprised at the number of referrals coming in and the scale of the help that was needed by families in the county:

“Since launching Julia’s House in Dorset 12 years ago, we have developed services that are unlike any other children’s hospice service in the South West. It is clear that frequent respite support makes a difference not just to the children but to family life and relationships under great stress. There is currently no equivalent service for children and families in Wiltshire. We want to help them as much as we can.”

Much of the funding to kick-start the new hospice appeal was raised at a private clay shoot and auction organised by Guy Ritchie at his home on the Dorset/Wiltshire border.

Julia’s House nurses had the chance to mingle with guests during the morning shoot. A short film about Julia’s House, commissioned by Guy and shot at the hospice, was screened during lunch. This was followed by a live auction.

Guy and Jacqui became patrons of Julia’s House after meeting staff and families at the charity’s 10th birthday reception hosted by Samantha Cameron at 10 Downing Street in 2013. Guy was particularly interested in how Julia’s House was planning to help Wiltshire families and pledged his support for the project.

Mr Edwards, who gave a speech at the event, said:

“Guy and Jacqui visited the hospice, met the children and were really moved and impressed by the support Julia’s House offers to families. They had expressed an interest in doing some fundraising, but what they raised far surpasses anything we could have hoped for. Julia’s House is almost totally dependent on fundraising and donations. We now hope the Wiltshire public will get behind this landmark creation of children’s hospice and respite care for every child and family who needs our support.”