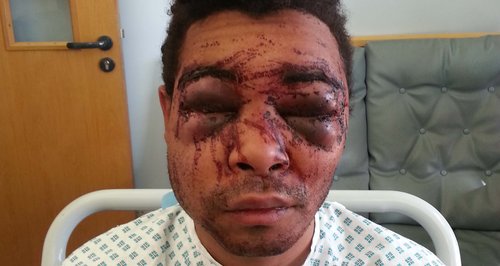 Wiltshire Police have released a picture of a man who suffered serious facial injuries during a robbery in Swindon.

It happened at around 12.10am on Wednesday 12th November in Faringdon Park.

He was approached by two men who punched him to the ground and took his rucksack and wallet before running off in the direction of Park Lane.

The suspects are described as aged in their late teens to early twenties and one is thought to have been wearing a grey tracksuit with the hood up.

DC Mark Harris said: ''As we can see in the photograph the victim sustained nasty facial injuries which required hospital treatment. He was very shaken by the attack. I am appealing for the help of the community and would like to hear from anyone who may have seen the robbery or who has information regarding those responsible. Any information could be crucial to the investigation.''

Two local men have been arrested on suspicion of robbery and subsequently released on bail pending further enquiries.

Anyone with information is asked to contact DC Harris on 101 or call Crimestoppers 0800 555 111 where details may be left anonymously if preferred.