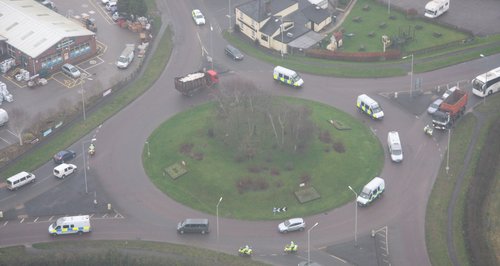 Wiltshire Police haev carried out the biggest single day of action in its history.

More than 400 police officers and staff execute upwards of 60 warrants at residential and businesses addresses in Swindon and London.

The operation was the second part of a long term undercover operation investigating the supply of Class A drugs in Wiltshire.

As a direct results of today's activity a total of 45 people have been arrested, a large amount of class A drugs have been seized along with £11,500 in cash and £15,000 of illegal tobacco seized.

15 addresses in London were also raided with 6 people arrested.

Senior Investigating Officer for the covert operation, Detective Inspector Mike Rees said: ''Today, sends a strong message out to anyone who sees Wiltshire as an easy target or Wiltshire Police as a soft touch.

''We will not tolerate anyone setting up a drugs network in Swindon or Wiltshire and we will put all of our resources into bringing those involved to justice.

''Today was the culmination of over a year’s hard work from our undercover officers who are putting themselves at risk by associating with known criminals, often without any protection, to build up the intelligence we need for an operation like this.

''I would like to pay my personal respects to these officers – I have total admiration for what they do.''

''As a result of this day of action alone, we anticipate that we have significantly disrupted or completely dismantled more than 15 of these networks operating in Swindon.

''Wiltshire Police have a dedicated team to specifically tackle these networks and we will relentlessly pursue those who are responsible for supplying drugs in our communities.

''We rely on local intelligence and I would urge anyone who has information or suspects that drugs are being sold or used in their neighbourhood to contact Wiltshire Police immediately.''

Wiltshire Police worked alongside a number of partnership agencies during the day of action today including Swindon Borough Council, drugs charities, local housing associations and the Swindon Community Safety Partnership.

Local Commander for the North Sector Superintendent Gavin Williams said: ''Although the supply of crack and heroin in Swindon is not disproportionate to the population of the town, clearly the effects of even a small amount of dealing class A drugs can be catastrophic.

''Class A drugs in particular can have a detrimental impact on our communities – not just those using the drugs but the wider society. The supply of drugs is directly linked to other crime and disorder.

''Our local communities should feel comfortable and confident in reporting anything they feel is suspicious and all information passed to us will be treated professionally.

''I would direct anyone with concerns to contact their local Neighbourhood Policing Team (NPT) in the first instance as they are often best place to offer advice on any local issues our communities have.''