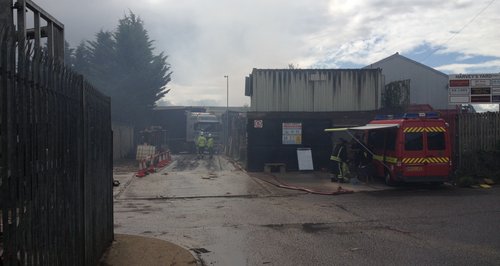 Aggressive fire fighting to tackle the blaze at Marshgate is planned to start on Wednesday morning and people are advised to anticipate more smoke.

More than a dozen firefighters will unleash thousands of litres of water per minute on the fire, which has been burning for five weeks, and this intense work will continue daily from 7am until 4pm.

The operation has been made possible because a thousand tonnes of the non-hazardous waste has already been removed from the Averies Recycling (Swindon) Limited (ARSL) site by contractors appointed by the Environment Agency using their regulatory powers.

More waste will continue being taken away from the site during the aggressive fire fighting, so fire rews can break down the stack of burning material and make further progress in putting out the fire.

Residents and local businesses are being informed of this work, which will almost certainly result in increased volumes of smoke, similar to those experienced in the early days of the fire. Air quality will continue to be monitored daily by Swindon Borough Council and Public Health England so that local people can be informed of any necessary additional health protection measures they may need to take.

At present the guidance remains the same as before, with those living close by and businesses in the local area advised to reduce their exposure, by closing windows and staying indoors, if affected by the smoke. Anyone who develops symptoms should seek medical advice through their GP or call NHS 111.

It is an unavoidably time-consuming and difficult operation, as the waste has to be spread out to cool before being deposited to landfill.

Aggressive fire fighting is therefore expected to continue for several weeks and partner agencies are grateful for people's ongoing co-operation and understanding. The Environment Agency is using its powers to remove the waste because the operator ARSL has failed to remove the waste, either voluntarily or in compliance with a suspension notice.

Ian Jeary, Area Manager at Wiltshire Fire & Rescue Service, said: ''We are pleased that fire crews will soon be able to intensify their work and this marks a significant step forward in this inevitably long and complex operation. Significant quantities of waste have now been removed from the site and this essential process will carry on, as the aggressive fire fighting gets underway. I would like to take this opportunity to thank everyone for their patience and support during this difficult time, particularly those directly affected by the fire. Unfortunately the situation will seem worse before it gets better, but everything possible is being done to minimise disruption and bring this fire to an end.''