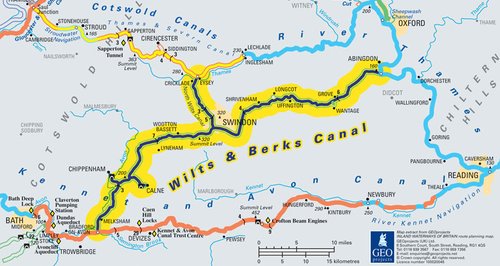 Melksham could receive a multi-million pound boost if a former waterway is brought back through the town, according to a new study.

The old line of the Wilts & Berks Canal was lost under modern developments but a plan has been submitted which would allow narrowboats to use the River Avon instead.

The Wilts & Berks Canal Trust hopes to create 5km of navigable waterway to include new locks, bridges, a towpath and cycleway, together with visitor mooring, landscaping, environmental improvements and even a hydro-electric power scheme. An independent report by AMEC Environment & Infrastructure UK Ltd suggests the Melksham Link could spark an investment of £55million in the town over the following ten years through riverside regeneration, canalside residential and commercial opportunities which could include a major new marina and housing, as well as a camping or caravan site, a restaurant and cafe or a new hotel.

Up to 250 jobs could be created during the initial construction phase alone followed by around 100 new jobs in the tourism sector and home-owners nearest the route could see significant increases in the value
of their homes.

The charity hopes to secure the majority of the funding for the restoration from national bodies such as the Heritage Lottery Fund or developers, and the report highlights other sections of the canal which have
already been rebuilt thanks to the generous support of various partners.

The AMEC report suggests the total construction costs of the Melksham Link would be around £21million and assumes work would start in 2015.

You can read the full report HERE

Find out more about the Wilts & Berks Canal Trust, and support the project, HERE