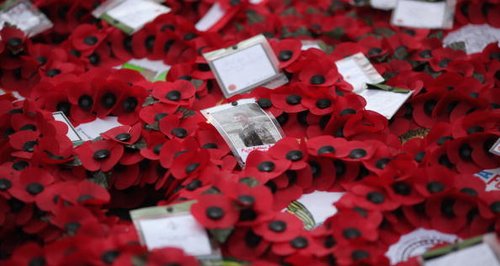 More than 1,000 places are available for people to sign up to ‘Run2Remember’ on Saturday 8 November and help raise money for The Royal British Legion’s Poppy Appeal.

The annual charity run takes place in Lydiard Park just outside Royal Wootton Bassett. It comes the day before Remembrance Sunday when the nation will pause to remember the fallen. The Legion is calling on people of all ages and abilities to take part in the event and show their support for the Armed Forces community. Many will do so in memory of loved ones and friends.

Among those taking part are Ann Lewis and her family. Her partner Tom is planning a grand entrance. The member of the Jump4Heroes display team will parachute into the event in time to see The Military Wives Choir perform at 10.00am before joining the family at the start line. They are running to show their respect to those who made a personal sacrifice for others. Ann Lewis says:

“Tom served in the Armed Forces for 25 years. During his service he lost too many close friends. We are running to remember them and support the good work of The Royal British Legion. I wanted my children, aged 18, 12 and 11, to take part to bring to the front of their minds the sacrifices made by others to allow us the life we live today.”

Entrants can choose to cover either a 1.1km, 5km or 11km course. They can walk, jog, march or run individually or as part of a team. Among the Poppy-adorned running clothes will be uniforms and fancy dress. It is all in aid of raising money to support the work of The Royal British Legion whose national Poppy Appeal, launched with a sunrise-to-sunset ‘Watch’ at the Cenotaph last week, will see 45 million Poppies distributed by 350,000 collectors with the aim of raising £40million.

Someone else hoping to raise money for The Royal British Legion is 15-year-old Vinnie Mills whose father served in the Armed Forces. This will be his third Run2Remember having taken part in the very first event at just 13 and last year’s run. The teenager says it is a great way for people young and old to show their respect and support for Servicemen and women past and present. Vinnie Mills says:

“On both occasions I took part in the 11km run, made a good time and enjoyed it. I took part because I know how much the Legion does to help soldiers and their families. My dad is in the Forces and my family benefitted from a holiday arranged by the Legion at a difficult time in our lives, so I wanted to give something back to say thank you. Hopefully this year my dad will be joining me too.”

Charles Byrne, Director of Fundraising for the Legion, founded in 1921 by veterans of the First World War who adopted the Poppy as their symbol, adds:

“Run2Remember is a fantastic event that gives people of all ages the opportunity to get behind the Poppy Appeal and show their support for the Armed Forces community. By taking part on 8 November they are not only commemorating the fallen but actively helping to support the future of the living, and right throughout the year.”