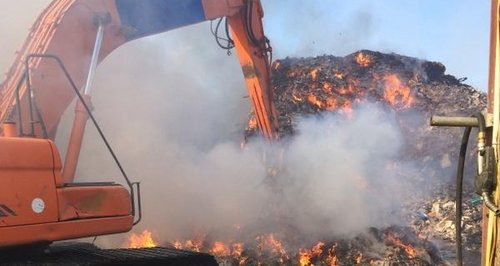 Heart's been told that "a multi-agency plan is being advanced to tackle the ongoing fire at the Averies Recycling (Swindon) Ltd site in Marshgate."

'Firefighters have successfully continued to keep the blaze under control over the weekend. However, the significant volume of waste involved and lack of space in which to operate is preventing crews from tackling the fire more aggressively. Partners are therefore stepping up measures to ensure that around half of the waste is removed by the operator and taken to a suitable site, so the fire can be fully put out as soon as possible.

The burnt waste cannot just be taken to landfill to ensure there is no risk of it re-igniting, resulting in further fire. Appropriate sites for the combustible waste to be temporarily stored and monitored are therefore being identified.

Fires of this nature would normally be allowed to extinguish on a managed basis but given the location of the site and its proximity to residents and businesses this is not considered a viable option as it would take several months for the fire to be extinguished.'

“We have made the decision with our partners to take clear action to bring this fire to a more expedient conclusion as it has been going on long enough and we remain concerned about the impact it is having on neighbouring businesses and those living nearby.

The firefighters have done a great job tackling the blaze up until this point, but they continue to be hampered by the sheer volume of waste and the confines of the site, which makes their job all the more difficult. That’s why we’re taking forward a plan which will enable crews to put the fire out faster.”

“Crews have continued working hard at the site over the weekend, successfully making sure that the fire doesn’t spread and is kept under control, minimising its impact on residents and local businesses. This remains an extremely challenging situation and appropriate action is underway which will enable our crews to fully extinguish the fire more swiftly.”

Swindon Borough Council is continuing to monitor smoke from the site and measure air quality. Those living close by and businesses in the local area are advised to continue to stay indoors and keep doors and windows closed, if affected by the smoke.

Similarly, motorists who have to travel through the smoke should keep windows closed, turn off air conditioning and keep their air vents closed.

Any smoke can be an irritant and as such, if people need to be outdoors in the Swindon area, they are advised to avoid areas affected by the smoke or ash, or to limit the time that they spend in them. Anyone who develops respiratory problems should seek medical advice through their GP or call NHS 111.

Members of the public are encouraged to report any incidents of pollution to the Environment Agency’s 24 hour incident hotline on 0800 807060.