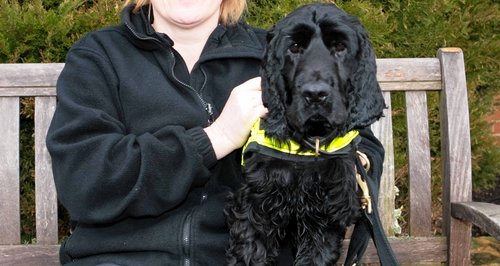 Griffin, one of Wiltshire Police's most successful passive drugs dogs has retired after nearly 5 years working with the force.

Griffin the Cocker Spaniel joined Wiltshire Police in March 2009 following his adoption by the Force the year earlier when he was two years old.

Griffin was rescued as a stray by the Blue Cross in Ireland the day he was due to be put to sleep.  He was paired up with PC Marie Poole in the Dog Unit which Police describe as a match made in heaven.

Over the years, Griffin has been responsible for approximately 500 detections.   These included finding over £3,000 worth of drugs on a woman at a local festival and, more recently, locating a wanted man who had 450 LSD tablets in his underwear.

PC Poole said: “Griffin is regularly recognised by members of the public, who seem to remember Griffin’s name but never mine.   Being as cute as he is, he has also on a number of occasions given cuddles to people that he has caught – he is always ready to cuddle someone in need.   Surprisingly, people he has caught have also given him a tickle and told him he's a clever dog while they are being arrested."

“One example of his naughtiness was during a training exercise on the non public side of a luggage carousel at Bristol airport. He found the training bag with drugs in it but refused to get off the carousel, which meant he entered the public side and went past 200 holiday makers waiting to collect bags, clinging tenaciously to his bag on the moving carousel."

“He is a great dog and has served the Force incredibly well.”

Griffin, who was PC Poole’s eighth police dog and third passive drug dog, will remain with PC Poole and her other retired police dog Frank.