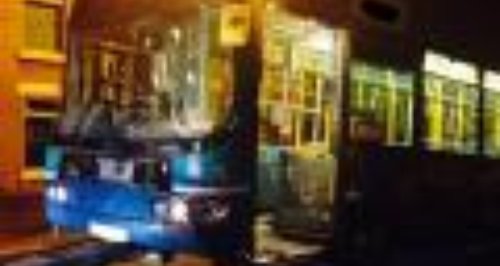 A man has been arrested after a bus was stolen and driven around a city centre on Sunday.

The single-decker DAF Holland bus was reported missing from the Arriva Yorkshire bus depot on Barnsley Road in Wakefield at 9:45pm. The vehicle was spotted by traffic officers who followed it from a safe distance.

Officers deployed specialist equipment to bring it to a safe and controlled stop on Ledger Lane at 10:18pm. The bus had collided with a number of parked vehicles on Ledger Lane, and caused minor damage to a 4x4 police car before it was stopped.

A 34 year old man was arrested at the scene. The bus was removed from Ledger Lane and taken back to the depot.

'Our officers spotted the bus very quickly after it was first reported stolen. It was driven at slow speed around Wakefield city centre for a short amount of time until it was successfully brought to a standstill.

'It was driven into a couple of stationary vehicles on the street, but thankfully no-one was hurt. We are appealing to anyone who may have any information about this incident to contact us on 101.'