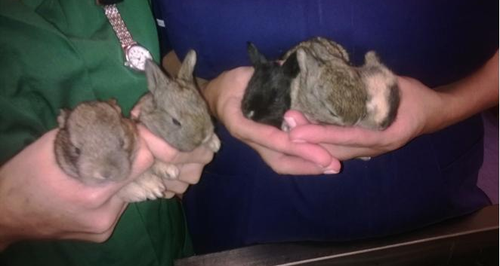 The RSPCA is appealing for information after five baby bunnies were found dumped in a box in a field in Soham, Cambridgeshire yesterday (Tuesday 9 September).

The domestic rabbit kits are thought to be around just three weeks old - too young to survive on their own. A passing member of the public found them abandoned on common land and brought them into the nearby Pet Doctors vets in Fordham Road.

The box contained shavings and hairs thought to belong to their mother. The young animals, one black, another harlequin and the other three agouti or ‘wild’ coloured, have now been taken to a specialist for hand-rearing, until they are strong and old enough to be rehomed.

RSPCA inspector Richard Lythgoe said: “These little things were tiny - small enough to fit into the palm of a hand - and were just not old enough to have any chance of fending for themselves. They are still supposed to be feeding off their mum. They were clearly dumped - as the box with its shavings shows - and they would have starved to death if this kind-hearted member of the public had not seen them and brought them to safety. We urge anyone with any information about how they came to be dumped like this to let us know - it is simply unacceptable to treat animals like this.”

Rowena Hope, a veterinary nursing assistant at Pet Doctors said: “These little things are just gorgeous. They are very cute and very lively - like springs! Rabbits are very difficult to look after when they are this young as they need very particular feeds, so we have taken them to a specialist to hand rear them.”