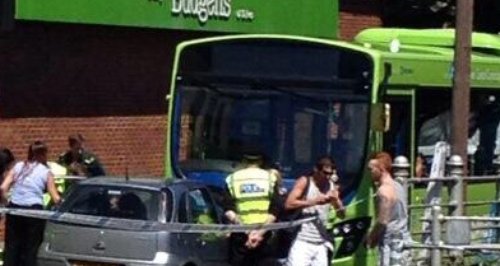 A pedestrian has been killed in a crash between a bus, a car and two pedestrians in St Ives.

Emergency services were called to reports of the collision in Market Road at about 11.15am today.

One of the pedestrians suffered fatal injuries in the crash.

Another has been taken to Addenbrooke's Hospital with serious, but not life-threatening, injuries.

The two people inside the car suffered minor injuries.

Diversions are currently in place and the road is expected to be re-opened soon.

Sergeant Gordon Murray said: "I would urge anyone who witness the collision or any of the vehicles prior to it, to call police.

Anyone with any information is asked to call the Roads Policing Unit on 101."

The East of England Ambulance Service sent three ambulances, its Hazardous Area Response Team and response car to the scene.

The Air Ambulance was also sent to the scene.

Michael Burke, who lives in St Ives, was nearby at the time and told Heart: "There are a large number of emergency vehicles here.

Lots of road closures have been put in by the police.

The accident has happened around the market area of St Ives town centre.

There are lots of people gathered around the crash as it is market day in St Ives, which is always a busy day."