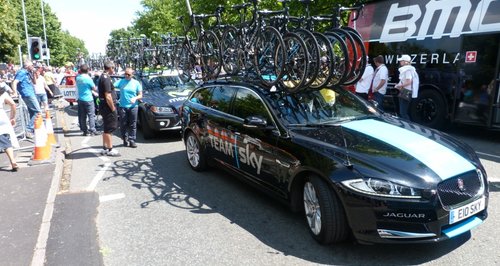 The world's top cycle riders have wound their way through the historic streets of Cambridge, as the Tour de France headed towards London.

Authorities estimate more than one million people lined the streets of Cambridge, Essex and London for Stage Three of the race.

The final English leg of the world famous race began in the university city at about 12.15pm with the riders passing King's College before the race start in nearby Trumpington.

The 197 riders passed through picturesque villages in Essex shortly after 1pm on Monday as thousands of people lined the route.

Some reports had suggested East Anglia may provide a more subdued welcome to that in Yorkshire over the weekend, but the crowd was 10 deep in parts of the village of Finchingfield in Essex.

An air ambulance was called to Finchingfield as crowds gathered in the heat ahead of the race.

The East of England Ambulance Service received reports that a man in his 60s had collapsed and been taken ill at around 10.30am.

A spokesman for the air ambulance said the casualty was in a "serious condition'' in Basildon Hospital.

Margaret Wood, 57, who made the journey from Cambridgeshire, said: "I was hoping to avoid the huge crowd in Cambridge but it's just as packed here.

We'll have to make a lot of noise to show Yorkshire that we won't be outdone.''

Crowds are lining the streets of London ready for a quick glimpse of the teams.

The third stage of the Tour de France follows what race director Christian Prudhomme hailed as the "grandest'' of openings to the prestigious competition in Yorkshire over the weekend, setting London a high standard to follow.

Mark Forrest, who travelled to London from Lincolnshire to watch the race, said: "I was in Yorkshire both days watching the race and it was incredible.

That takes some beating but so far the crowds in London have also been great.

I've picked a spot on a corner by Big Ben because I'm hoping for a few more thrills and spills.''

Theresa Morris, from America, planned her trip to England especially to see the Tour de France.

She said: "This could be the only time I see the Tour so I knew I couldn't miss it.

I want to be here with the people, I want to see how fast (the cyclists) go by you.

It's fantastic, to use a British term.

The crowds are great.

You have to be in London today.''

German Marcel Kittel won the stage, finishing on the Mall in London just after 4pm.

Councillor Noel Kavanagh, Cycling Champion at Cambridgeshire County Council, said: "Hosting the start of Stage 3 of the Tour de France truly was a day like no other.

In its long and rich history, I don't think Cambridge has ever witnessed such amazing crowds or the incredible excitement and electric atmosphere which I am proud to have been able to witness.

The day would not have been possible without the efforts of so many people and they deserve immense credit for the work they did to help create so many unforgettable memories.

Good luck to all the riders for the rest of the Tour - it was a pleasure and a privilege to have been part of your journey."