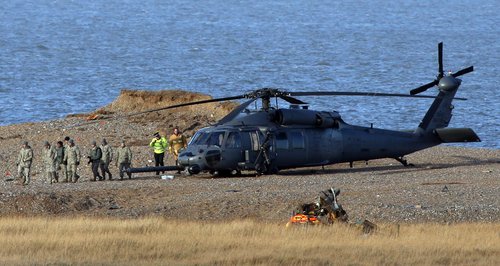 A US military helicopter from RAF Lakenheath which came down on the North Norfolk coast, killing four crew members, crashed as a result of bird strikes, officials have said

The HH-60 Pave Hawk helicopter crashed near Cley next the Sea on January 7 during a routine training exercise.

This morning the US Air Force issued the findings of its investigation, saying Brigadier General Jon Norman, president of the inquiry's board, had "found clear and convincing evidence that multiple bird strikes caused the mishap by rendering the pilot and co-pilot unconscious and disabling the trim and flight path stabilisation system''.

The four crewmembers were fatally injured in the mishap.

There were no civilian injuries or fatalities.

The MA was destroyed upon impact.

Damage to private property consisted of minimal burning to grass at the crash site.

The purpose of the training mission was to conduct a nighttime rescue scenario of a downed F-16 pilot.

The training mission included two aircraft, the flight lead aircraft and the MA, collectively known as the mishap formation (MF).

The MF departed RAF Lakenheath at 1733L and proceeded to an initial point to verify the status of the simulated downed pilot and conduct threat analysis.

Strong winds pushed the MF toward a populated area.

To avoid causing a noise disturbance, the MF reestablished its initial point to the north near the coastline.

The MA departed the new initial point at 1804L, flying east at approximately 110 feet above ground level and 110 knots indicated air speed toward a landing zone near Salthouse, UK.

The flight path took the MF over Cley Marshes in the Norfolk Wildlife Trust near Cley next the Sea.

A flock of geese took flight from Cley Marshes, likely startled by the noise of the approaching helicopters, and struck the MA.

In addition, at least one goose hit the nose of the MA, disabling the trim and flight path stabilization systems.

With the mishap pilot and mishap co-pilot unconscious and the trim and flight path stabilization disabled, the MA's cyclic stick, which controls pitch and roll of the aircraft, was free to move randomly.

The MA banked left to a point where it had no vertical lift.

Without vertical lift, and without pilot input to correct the left roll, the MA was not able to remain airborne or maintain controlled flight.

The MA impacted the ground at 1805L approximately three seconds after being struck by the geese.

The Accident Investigation Board President found by clear and convincing evidence that multiple bird strikes caused the mishap by rendering the mishap pilot and mishap co-pilot unconscious and disabling the trim and flight path stabilization systems.