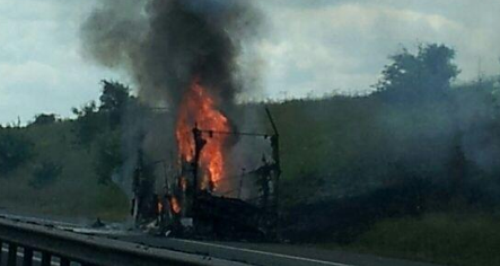 Firefighters have been called to a fire that's destroyed a double-decker bus on the M11.

Emergency services were called to the northbound carriageway between Bishops Stortford and Saffron Walden at 10am.

The call came during today's 24 hour strike by members of the Fire Brigades Union, who walked out in their ongoing dispute with the government over pensions and retirement age.

A spokesperson for Essex Fire and Rescue Service said: "On arrival crews reported that a double decker bus was completely alight and that the fire was affecting the motorway embankment.

Firefighters in breathing apparatus used two hose reel jets to tackle the bus fire while beaters were used to extinguish flames on the embankment.

The motorway was closed while fire crews dealt with the fire, but it has since re-opened.

A spokesman for Stagecoach said "At around 10am today (Thursday 12 June) smoke was detected from one of our vehicles on the M11 heading north near to Saffron Walden. The bus was out of service at the time and had no passengers on board. The driver was not injured as a result of the incident. The fire service attended, however there has been extensive damage caused to the vehicle.

Safety is our absolute priority and we will investigate the cause of this incident as a matter of urgency."