Police have released CCTV images of a man who tried to hold up a Peterborough pizza store at knifepoint.

The masked man burst into Dominos Pizza in Bretton Centre, Peterborough, at about 11.10pm on July 30.

He threatened a member of staff with a knife and demanded they hand over cash from the till, but fled empty-handed.

He ran off towards Benlands. 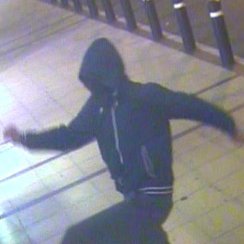 Detective Constable Alex Lambert said: "This was a terrifying experience for the member of staff and I would urge anyone who knows who is responsible to call police.

"Although his face was covered, the clothing the offender was wearing is quite distinctive and hopefully someone will recognise it."