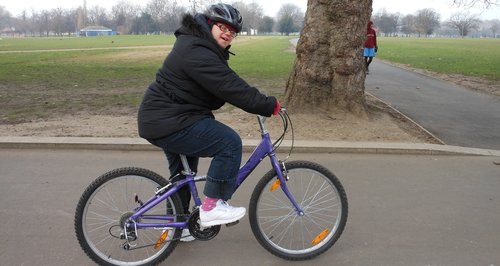 A Cambridgeshire volunteer with Down's Syndrome who has helped to make cycling accessible to people of all abilities is the winner of a new award, Prime Minister David Cameron has announced.

40 year old Angela Sanford from Oakington, who is also severely sight impaired, volunteers to help people enjoy cycling, including people with disabilities, nervous cyclists, those recovering from injury and even a 92 year-old.

She is the latest recipient of a Point of Light award, which recognises outstanding individual volunteers, people who are making a change in their community and inspiring others. Each day, someone, somewhere in the country is selected to receive the award to celebrate their remarkable achievements.

After learning to ride a two wheeler with the support and help of her carer, Angela's passion for cycling was boosted when she was asked to help others like her try cycling on accessible bikes.

With the help of other cycling enthusiasts, she took her friend Aaron's idea to get people of all abilities cycling together and helped build community project You Can Bike Too.

With it's weekly cycling sessions and bike hire, You Can Bike Too gives people the freedom, confidence and tools to be able to enjoy the outdoors with their families and friends, and Angela's natural affinity with people alongside her commitment has made the project a great success.

Prime Minister David Cameron said: 'Angela's enthusiasm and energy brings families together and encourages people of all ages and abilities to enjoy cycling.

She has had a great impact on the local community - inspiring others to have confidence, form new friendships and enjoy the outdoors.

I am delighted to make Angela a Point of Light.'

Angela said: "I feel happy, emotional and proud to be awarded with a Point of Light.

I want to see everyone on a bike!"