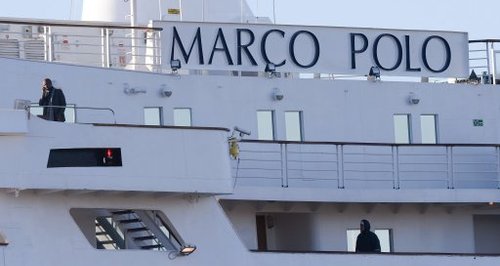 The wife of an Essex man killed after a freak wave hit a cruise ship in the English Channel has criticised the "badly maintained'' vessel as she paid tribute to her "lovely husband''.

85-year-old James Swinstead died "almost instantly'' after water rushed on board the British cruise ship Marco Polo as it was battered by waves during severe storms.

The 22,000-tonne vessel, operated by Cruise and Maritime Voyages (CMV), was heading for its home port of Tilbury at the end of a 42-night voyage when the incident happened on Friday (14 February).

Water crashed through a window, injuring a number of the 735 passengers, who were mainly British.

A female passenger in her 70s was airlifted off the ship, while 14 people were treated for minor injuries.

Mr Swinstead, a father-of-two from Colchester, was on the cruise with his wife Helen.

Speaking in Tilbury after the ship docked, she said: "I think it killed him almost instantly.

"With our insurance I think I'm entitled to £2,000, which won't even cover getting him home to Colchester.

"I think the shipping company should give some sort of compensation. The ship was badly maintained. Four windows blew.

"I said to my husband, because my father used to make paint, that's going to leak because there was a rusty puddle on the window sill. I expect to hear from the Marco Polo.

"He was a lovely husband.

"The crew have been fantastic. I think the ship is improperly maintained. It had come from Madeira before we got on it in January and they had bad storms then.

"There's so much paint on the outside you can't see the rust, they just slop some more on when they get to port.

"It was quite dreadful. I was sitting next to him and this window came in and the sea with it.

"We were all very, very wet. I think a woman was taken to hospital and my husband was going to get on the helicopter but he died before they could get him on it.

"He's never made headline news. He'll be sitting on his cloud chortling.''