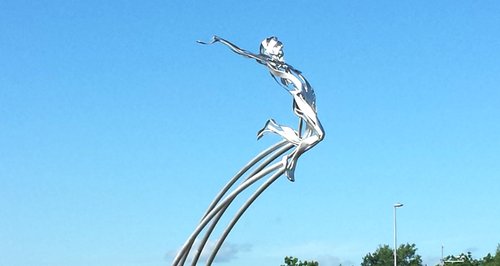 It went up on the Fen Roundabout three days ago but Greg told Heart he hasn't got round to seeing his new statue just yet.

The 'Leaping Man' is outside the entrance to Magna Park on the A421 and has been funded by Gazley's who run the industrial area as part of an agreement with the council to provide local artwork.

The design of a man doing the long jump is to honour Greg Rutherford, who lives in Woburn Sands and won Gold in the Olympics in 2012.

Greg told Heart he's only just got back from Holland but he plans to visit the statue soon:

"It looks really cool from all the photographs I've seen, when I put a tweet out about it everyone reacted really well and said how amazing it was.

Heart asked Greg how it feels to have this recognition locally:

"It's very real and very strange to think I'm born and bred in the area and now there’s something on a roundabout to do with me.

"I'm thankful I guess, it's lovely to be in such a great town that we are and have people wanting to honour and get behind an achievement, I think it's fantastic"

He hopes this will help continue the legacy of the Olympic Games:

"It is really brilliant and hopefully it'll stay there forever so it'll be something that'll remind everyone of the Olympic Games, which was such a great time"