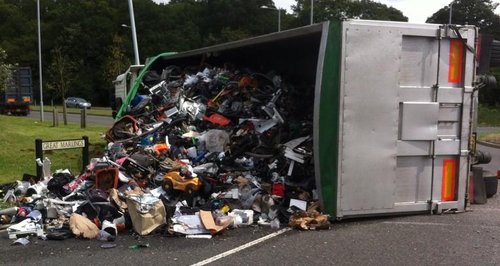 A lorry driver has been taken to hospital, after a crash on the A505 near Luton.

The vehicle overturned after hitting a roundabout at around 11:45am today.

The lorry then fell onto its side, shedding some of its load on the carriageway.

A spokesperson for the East of England Ambulance Service said: "We dispatched an ambulance, an ambulance officer, and the East Anglian Air Ambulance to the scene.

The man, who we believe to be in his 30s, suffered a head injury and was taken by land ambulance to the Luton and Dunstable Hospital.

His condition is not thought to be life-threatening."