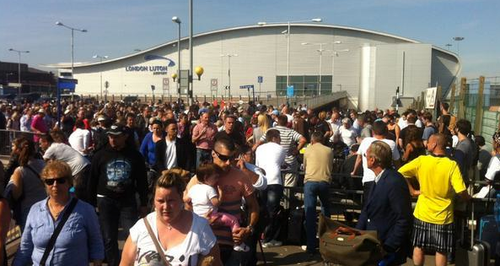 Luton Airport has been evacuated this afternoon after a suspicious package was found in the security search area.

EasyJet flight EZY2104 from Berlin is the first flight to land at Luton Airport since the closure earlier this afternoon.

As a result of the earlier evacuation of London Luton Airport, easyJet has taken the decision the cancel the remainder of today’s flights to and from Luton Airport. In total easyJet has now cancelled 41 flights – 18 from earlier today and the remainder from this evening’s programme. Six easyJet flights scheduled to land at London Luton Airport were diverted – four to Stansted Airport, one to Birmingham Airport and one to London Southend Airport and all passengers were coached to Luton.

Passengers who are affected by the cancellations can change their flight or obtain a refund at easyJet.com. We have also set up a Customer Service desk at our office where we will help passengers make any arrangements. We will do all possible to support them including providing hotel accommodation where it is available.

Whilst this is out of our control we apologise for the inconvenience caused and would like to thank passengers for their patience and co-operation. The safety and security of its passengers and crew is the airline’s highest priority.

We expect operations to return to normal tomorrow morning.

London Luton Airport is in the process of reopening following a security alert that took place earlier this afternoon.

Officers were called to the departure terminal at 1.36pm after airport security raised concerns about an item that was passed through a security check in keeping with the airport’s policies and procedures.

Members of the public were evacuated from the terminal area as a safety precaution while the Explosive Ordnance Disposal (EOD) team were called in to undertake the necessary checks required.

A controlled explosion was conducted at 5.15pm and it was confirmed that the item destroyed, although deemed suspicious, did not present a wider danger.

Bedfordshire Police can confirm that no one has been arrested in relation to this incident.

We can confirm that controlled explosion has taken place at Luton Airport. Item is safe. Airport opening soon but there will be delays.

All flights have been suspended and the roads between Junction 10A of the M1, and leading up to the Airport have been closed. The A1081 and London Road towards Luton town centre remain open to traffic travelling from the M1.

We are advising passengers to contact their airlines for information about specific flights which are being diverted to airports in the London area and the Midlands.

We will provide a further update as soon as we are able.

We understand passengers will be frustrated by the delays they are experiencing.

We are working closely with the police to ensure passengers are not inconvenienced unnecessarily but we must ensure that the safety and security of all our passengers and staff remains our top priority.

We are advising passengers to contact their airlines for information about specific flights and will provide a further update as soon as we are able. 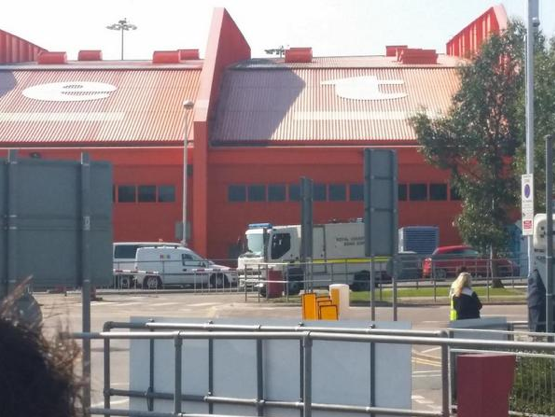 London Luton Airport has evacuated the terminal building after a suspicious item was found in the security search area.  The decision has been taken with the Police to ensure the safety and security of passengers and staff.

All incoming flights have been suspended and the approach road to the Airport has also been closed.  Passengers are advised to contact their airlines to establish the status of their flights.  Further updates regarding the security and operations at the Airport will be provided as soon as possible.