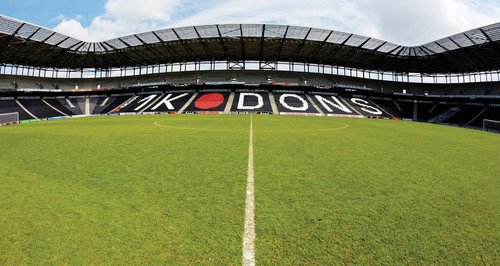 MK Dons have confirmed the ticket details for their Capital One Cup fixture against Manchester United at stadium:mk.

The game will take place at 8pm on Tuesday 26th August.

Season ticket holders and current members are being given priority access to booking tickets when they go on sale from 2pm today.

They are available from the Box Office at stadium:mk and kiosk at thecentre:mk.

Tickets will only be sold to season ticket holders and current members until 8pm on Monday 18th.

Wheelchair and disabled supporters who are season ticket holders should call the Disability Liaison Officer on 01908 622901 to purchase their seats.

Supporters purchasing tickets for the home fixtures with Coventry City (Saturday 23rd August) and/or Crawley Town (Saturday 30th August) and who are pre registered on the MK Dons ticket database can buy an additional ticket for the Man United fixture at the non-season ticket holder price from 2pm on Friday.

This facility is only available to personal callers to stadiummk and thecentre:mk. There will no refunds on Coventry or Crawley tickets.

Remaining tickets will go on sale to the public at 8am on Tuesday 19th.

The club will release further details in future.

This match has also been designated all-ticket, meaning no tickets will be available to buy on the day of the game.

The Club will only sell home tickets in the lower tier before moving to the upper tier if and when required.

Tickets are priced as follows:

General sale – from 9am on Tuesday 19th