Officers from the Kent and Essex Serious Crime Directorate are urging people to be extra vigilant in the fight against ATM thieves.

Incidents of cash machine thefts tend to increase in the run up to the Christmas and New Year period with thieves trying a number of methods to get their hands on the money housed inside the machines.

Detectives continue to work closely with ATM providers and site owners where cash machines are Diggerlocated to identify vulnerable sites and repeat targets in a bid to further crackdown on thieves. 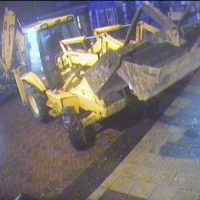 Whilst significant advances have been made with respect to ATM security including, dye packs, Smartwater deployment  improved anchorage systems, thieves still try to steal them.

Banks and ATM providers are offering a reward of up £25,000 to anyone who provides information in relation to a cash machine theft that leads to a conviction. All information received will be treated in the strictest of confidence.

Officers are also asking members of the public to help them in the fight against cash machine theft by reporting suspicious activity at ATMs and the surrounding areas.

Historically thieves have used heavy machinery such as diggers and heavy duty 4x4s to rip cash machines from their housings and police would like to hear from anyone who witnesses suspicious activity at constructions sites, particularly the movement of diggers during unsociable hours.

New trends in targeting cash machines are also starting to emerge where thieves use gas to explode ATM fixings and gain access to money. If you’re at a cash machine and smell gas, move away and call 999.

Detective Chief Inspector John McDermott said: ‘We target ATM thieves all the time but this is a determined, conscious effort to build on previous successes.

‘We are urging people to be extra vigilant in the fight against cash machine thieves –Criminals involved in this sort of offending are or often ruthless and determined and will do anything they can to get their hands on the money inside – often disregarding public safety as they go about their criminal deeds.

‘We enjoy a good relationship with the ATM industry and those businesses which have cash machines and we will pursue every line of investigation possible to bring these thieves to justice.’