Sheppey; 130 vehicles in accident on bridge

The crash occurred on the new Sheppey crossing bridge on the A249 in Kent at 7.15am and emergency services are dealing with the incident

A Kent Police spokeswoman said visibility was a problem over the bridge, but it was not clear whether that caused the pile-up.

Motorists were warned to avoid the area.

There are reports of eight serious injuries and 200 minor injuries, police said.

"Kent Police was called at about 7.15am on Thursday September 5 to the London-bound carriageway on the Sheppey crossing,'' a force spokesman said.

"It has been reported there were collisions at the top of the crossing and at the foot of the approach to the crossing. Emergency services are currently at the scene dealing with the incident.

"At this stage it is unknown exactly how many vehicles are involved, but early reports suggest more than 100 vehicles. There are reports of six serious injuries and 200 minor injuries.

"Officers are urging motorists to avoid the area but if a journey to the island is essential, the old Kingsferry Bridge remains open but expect long delays. 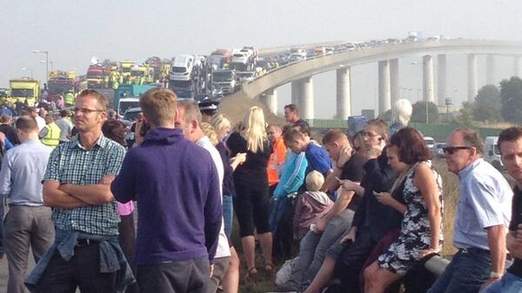 "The road remains closed at Cowstead Corner on the island and motorists are being directed on to the Kingsferry Bridge, while the road is closed at the Iwade turn-off and vehicles directed through the village on to the old A249.''
The accident happened in thick fog with some witnesses saying that visibility was down to 20 yards in places and some motorists were driving like idiots prior to the pile-up.

The scene on the bridge was a mass of tangled cars, lorries and even a car transporter, with reports saying that the crash went on for 10 minutes as cars continuously collided with each other.

The uninjured and the walking wounded are being taken down from the bridge on the Sittingbourne side.

Witness Martin Stammers, 45, from Minster, said "It's horrific. I've never seen anything like it in my life.

"All you could hear was cars crashing. We got out of our car and it was eerily quiet, with visibility down to just 20 yards.

South East Coast Ambulance Service said it was dealing with a major incident with 30 ambulances and cars at the scene, but a spokesman said he was not aware of any deaths.

It has deployed its hazardous area response teams (HART) to the scene and confirmed there was a wide range of injuries from seriously injured to walking wounded.

"We have set up triage at the scene and are treating patients,'' he said.

Those injured will be ferried to local hospitals including Medway Maritime Hospital in Gillingham and Queen Elizabeth The Queen Mother Hospital in Margate.

A Kent Fire and Rescue Service spokesman also said there were no deaths.

A spokesman said: "Crews are currently at the scene of a serious RTC (road traffic collision) involving up to 100 vehicles.

"There are no fatalities but ambulance crews are dealing with a large number of walking wounded casualties. Firefighters have used hydraulic cutting equipment to release five people from their vehicles.

A driver involved in the incident, Chris Buckingham, told Sky News: ``He was going the other way and what he managed to do, which has probably saved lives, is he's gone down to the end of the carriageway, gone across the roundabout and actually blocked off the road so no more cars could actually enter the dual carriageway before the emergency services got there.

"Whoever that guy is I'd like to shake his hand because he's probably saved lives today.''

There were reports of some motorists driving "like idiots'' in the conditions before the crash which completely closed the A249 that goes over the bridge.

The scene was full of buckled cars, lorries and even a car transporter as people waited at the side of the road to receive help from the emergency services.