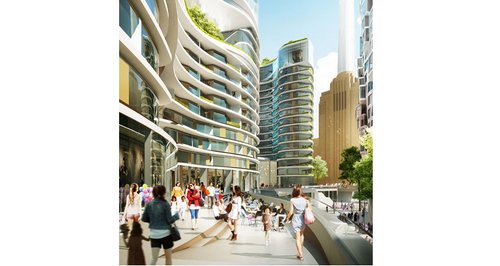 Plans have been unveiled for a new high street on the site of the old Battersea Power Station.

The pedestrianised street, designed by architects Gehry Partners and Foster & Partners, will be called The Electric Boulevard and sit to the south of the power station.

It will connect the Northern Line Extension station with the power station on the redeveloped 42-acre site in south London.

The ground-level shops to the east of the boulevard, designed by Gehry Partners, will be called Prospect Place and have double-height ceilings while two floors of retail units, created by Foster & Partners, will front on to the western side.

This is the third phase of the planned regeneration for the former industrial site and is to include more than 1,300 homes in a range of sizes and styles in two zones on either side of the boulevard, a 160-room hotel and 350,000 sq ft of retail and restaurant space plus additional leisure space.

Gehry Partners founder Frank Gehry said: "Our goal from the start has been to create a neighbourhood that connects into the historic fabric of the city of London, but one that has its own identity and integrity."

Grant Brooker, design director and senior partner at Foster & Partners, said: "We moved our own office to Wandsworth almost 25 years ago - the borough is very important to us, so we were absolutely delighted to be chosen by the shareholders of Battersea power station to be part of this inspiring regeneration project. It will transform the area and create a vibrant new district for south London that we can all be proud of."

Rob Tincknell, chief executive of the Battersea Power Station Development Company, said: "We are determined to create a genuine sense of place, and developing landmark buildings in which people are proud to make their home and work in is vital to us achieving this aim."

Culture minister Ed Vaizey described Battersea power station as an "iconic site" and hoped the new design would "put Battersea on the world stage once again".

"The plans for a new high street for the capital show that London continues to attract the best in terms of architecture, design and innovation," he said.