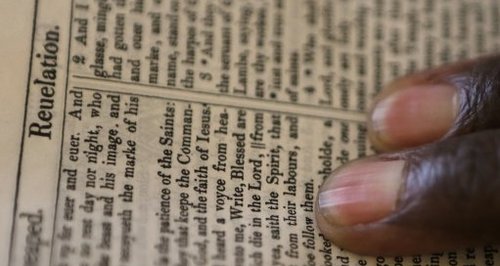 A Christian nursery nurse is claiming unfair dismissal after losing her job because she said she told a gay colleague that the Bible regards the practice of homosexuality as a sin.

Sarah Mbuyi says she only made the comments after being pressed on her beliefs by a colleague who initiated the conversation at Newpark Childcare in Highbury in January.

She is being supported in her case by the Christian Legal Centre, whose chief executive, Andrea Williams, said the Government has "seriously let down" the Christian community and criticised Prime Minister David Cameron for attempting to "mould Christianity to his political agenda".

Ms Mbuyi, who is claiming unfair dismissal on grounds of religious discrimination, said: "When I said 'No, God does not condone the practice of homosexuality, but does love you and says you should come to Him as you are', she became emotional and went off to report me to my manager."

At an internal disciplinary hearing she says she was confronted with her colleague's allegations, which included the false claim that she herself had raised the issue of homosexuality on a number of occasions. The nursery directors instantly dismissed her for gross misconduct.

"My disciplinary hearing was hopelessly one-sided because they put my accuser's claims to me as fact, without any forewarning and so I wasn't prepared. It seemed to me they had already made up their minds to justify sacking me, before hearing my side of the story, " Ms Mbuyi added.

Barrister Ms Williams said that if Mr Cameron "is serious in his support for Christianity, he will intervene in Sarah's case".

She went on: "Sharing Biblical truths out of genuine love and concern for colleagues is being outlawed in the workplace by a dominating cultural correctness.

"There is a culture of fear which closes down freedom of speech and the manifestation of faith. This culture brands the liberating good news of the Gospel as oppressive and regressive.

"Sarah's case demonstrates the confusion we're experiencing in current times. David Cameron has given public recognition of the enormous positive impact that Jesus Christ has had on our nation but he wants to mould Christianity to his political agenda. History shows that Christianity is greater than any political agenda.

"David Cameron has ignored the concerns of the Christian community by driving through same-sex marriage. Any dissent in the public space, in the workplace, to the new prevailing orthodoxy means punishment as Sarah is experiencing.

"This is not a Government with a track record of recognising and respecting Christian faith. It has deliberately and consistently undermined Christians and their freedom to live out their faith in the public square."

Mr Cameron said earlier this week that Britain should be ''more confident about our status as a Christian country" and "more evangelical about a faith that compels us to get out there and make a difference to people's lives".

In an article for the Church Times he described himself as a ''classic'' member of the Church of England, ''not that regular in attendance, and a bit vague on some of the more difficult parts of the faith''.