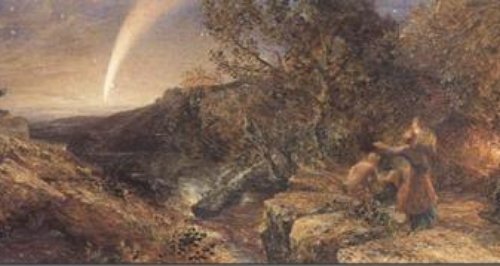 Police are trying to find thieves who stole a £100,000 painting from an 89 year old London woman while posing as couriers from her bank.

The painting, 'The Comet of 1858' (pictured) by Samuel Palmer was stolen along with jewellery and banks cards from the woman's house in South Kensington during the evening of Saturday 18 January 2014.

The woman was telephoned by someone claiming that her bank cards had been used in a crime and that she needed to contact her bank. The victim immediately attempted to call the bank, but the caller had not hung up and stayed on the line.

The victim believed she was speaking to her bank, but in fact it was still the original caller. The caller said someone would attend her address and collect her cards. They also asked if she had anything of value in the house and the victim mentioned the painting.

Later that evening a man attended the address and took the painting, items of jewellery and bank cards. He is described as a white man, believed aged in his 30s, approx 5ft 10inches tall, with dark hair and spoke with an English accent.

= Neither your bank nor the police would ever ring you and state that they are coming to your home to pick up your card, so never hand it over to anyone who comes to collect it.
= Your bank will never ask you to authorise anything by entering your pin into the telephone handset.
= Never share your pin with anyone - the only times you should use your pin is at a cash machine or when you use a chip and pin machine in a shop / restaurant.
= If you think you have been the victim of a fraud or scam of this nature report the crime to your local police.