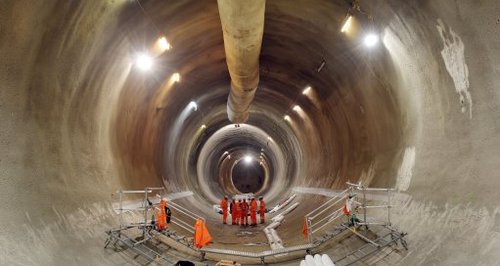 A contractor was injured in an incident that is believed to have happened in a shaft close to Tottenham Court Road in central London.

A Crossrail spokesman said: "Sadly, at approximately 5am this morning, a contractor working at our site in Fisher Street, London, was fatally injured.

"Our first and foremost thoughts are with the family and friends affected by this. The next of kin are being informed.

"We are establishing the facts and a full investigation into the incident has commenced."

Unite regional officer Guy Langston said: "Our deepest condolences go out to the family of the worker who has been tragically killed today.

"Crossrail's contractor BFK has some serious questions to answer. Unite is particularly concerned about health and safety at the site because this is not the first serious incident. In December 2012, a worker sustained horrific burns when he cut through a cable.

"We now expect BFK to meet with Unite as a matter of urgency. The contractor must explain how it intends to do everything in its power to ensure that a tragic incident like this does not happen again."

"Since the Government took power, there have been constant attacks on safety laws and regulations. The Government should be strengthening health and safety laws, not weakening them."

Crossrail is Europe's largest infrastructure project. Stretching from Maidenhead and Heathrow in the west, across to Shenfield and Abbey Wood in the east, the railway will cover more than 60 miles of track including 13 miles of new twin-bore rail tunnels and nine new stations.

Up to 24 trains per hour will operate in the central section between Paddington and Whitechapel during peak periods, with each train able to carry 1,500 passengers. An estimated 200 million people will travel on Crossrail each year.