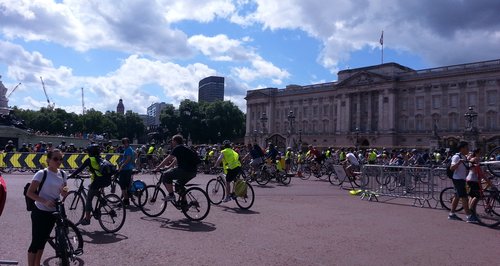 More than £30,000 has now been raised in honour of the cyclist who died on a charity bike ride.

Kris Cook, 36, described by his partner Nicola Tait as a "beautiful, kind and wonderful" man, suffered a sudden cardiac arrest as he took part in the Prudential RideLondon-Surrey 100 on Sunday 10 August 2014.

He had been riding to raise funds for his local Woking Hospice in Surrey and was close to hitting his £500 target before the race.

Mr Cook had collapsed at popular beauty spot Newlands Corner in Guildford. Emergency services treated him at the scene but he died later in hospital.

Michael Spurr, chief executive of the National Offender Management Service, described Mr Cook as "a respected colleague", adding: "Kris was an extremely well regarded member of staff and will be greatly missed by his work colleagues in the National Offender Management Service. Our thoughts are with his family and friends at this very sad and difficult time."

Ms Tait, who took part in the ride with him, spoke of her grief on Facebook and called on people to donate to Woking Hospice in his memory. Fellow cyclists, including many who were also on the charity ride, were among the thousands of people who went online - at www.justgiving.com/Kris-Cook - to make a donation.

Ms Tait wrote: "I just want him to raise loads and loads ... I need everyone to help me on this," adding: "It will be on the news and I want the world to know he was so special. I need everyone's support on this. More than I have ever needed. X"

She also asked people to drop flowers, letters and messages at Newlands Corner, and thanked people for their support.

Mr Cook was part of a group of 12 riders raising money for the palliative care hospice.

According to the event's organisers, his mother, Sue Cook, said he died "doing something he loved".

She also welcomed the thousands of pounds donated to Woking Hospice in her son's memory.

He had previously said: "I have never taken on a challenge such as this."

One donor, who wished to remain anonymous, wrote: "You were riding with my wife Marie in the team and she said you were looking after them all. I hope you are being looked after now. Our thoughts are with you and your family. RIP."

Gregg Baker wrote: "RIP Kris. Worked with you at HMP Feltham and I'm also into cycling. A Tragic loss. All my best wishes to your partner and family," while Caroline Wright added: "Will remember the fun times Kris, that and your advice, help and strength to stand up for what you believe is right; not necessarily an easy thing to do but you always did."

Denise Denman, who also donated, wrote: "My dad passed away in Woking Hospice last September. The care they gave/give can never be repaid. Kris's family and fellow supporters my thoughts are with you at this sad time," and Rita Johnson said simply: "I don't know you - but just read this tragic story. Such sad news my thoughts and prayers are with your family."

Heather Hayward, who took part in the ride, paid tribute to the response of the emergency services after Mr Cook collapsed.

Mrs Hayward, from Ashford, Kent, said: "I was behind Kris when he went down. The ride was stopped and we all waited whilst he was being worked on.

"The medics and police were fantastic, and tried so hard to bring him back. We saw them doing CPR for a long time.

"I hope the family take comfort in the fact that he was really looked after. The police moved their bikes to make a screen around him to give privacy and dignity."

Transport for London said more than 80,000 people took part in the Prudential RideLondon-Surrey 100, which was shortened from 100 miles to 86 after being hit by torrential rain and strong winds as the remnants of Hurricane Bertha were felt in the UK.

In a statement on Woking Hospice's website, chief executive Nigel Harding said last night: "This is a real tragedy and Kris's death has shocked us all.

"We had almost 40 people cycling on our behalf and we are most grateful to them all but the death of Kris has inevitably cast a long shadow over the proceedings.

"All our thoughts are with his family and friends at this very sad time and we will try to offer them any support we can."

A post-mortem examination will be carried out to establish the cause of death.