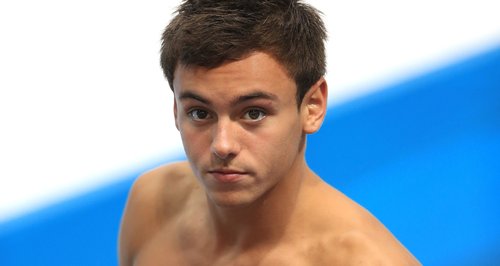 Tom Daley's described as 'scary' being on a plane to London that had to make an emergency landing in Russia.

The diver and his partner Dustin Lance Black were among 301 people aboard a Virgin Atlantic Airbus A340 which had to put down in the Siberian city of Irkutsk, on a flight from Shanghai to London on Monday 21 July 2014.

Daley, who was returning after competing in the world diving championships in Shanghai, wrote on Instagram: "Just had to make an emergency landing in Irkutsk, Russia on the way back from Shanghai. Here's the pic of the fuel dump before landing."

Dustin Lance Black wrote: 'EMERGENCY LANDING into a Russian town. This was our view over Mongolia."

A Virgin spokeswoman said: "Virgin Atlantic can confirm that the VS251 travelling from Shanghai to London Heathrow has diverted to Irkutsk Airport, Russia, as a precautionary measure due to a technical issue. Safety and security is always our top priority.

"The aircraft is currently on the ground and our customers are being looked after by our cabin crew. Our priority now is to ensure our customers resume their journey as soon as possible.

"The airline would like to thank passengers for their patience and apologise for any inconvenience caused."

There were 286 passengers aboard, including three infants, as well as three flight deck crew and 12 cabin crew.