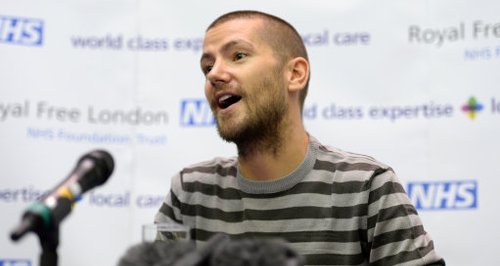 A British nurse has been discharged from a London hospital after being treated for the deadly Ebola virus.

William Pooley, 29, said that he had been "very lucky".

He was flown back to the UK for treatment on 24 August 2014 after contracting the virus in Sierra Leone.

He was being cared for in a special unit at the Royal Free Hospital in north London but the hospital announced that he was being discharged on Wednesday 3 September.

At a press conference, he praised the "world-class care" he had received at the hospital and thanked the Government and RAF for getting him home so quickly.

He said he had feared for his life after being diagnosed with the virus and woken by doctors in protective clothing.

"I was worried I was going to die."

The treatment he received was a world away from that being used to treat those with Ebola in west Africa, Mr Pooley said.

He was flown back to London and treated at the Hampstead hospital with the experimental ZMapp drug, which was used successfully to treat two Americans who contracted the disease.

He said: "I was very lucky in several ways, firstly in the standard of care that I received, which is a world apart from what people are receiving in west Africa, despite various organisations' best efforts.

"I had amazing care, which was one difference.

"The other difference is that my symptoms never progressed to the worst stage of the disease - people I have seen dying horrible deaths. I had some unpleasant symptoms but nothing compared to some of the worst of the disease, especially when people are dying."

He did not even vomit, he said, but had suffered high temperatures and some stomach problems.

He told reporters he had no regrets about his decision to go to help people stricken with the deadly virus in west Africa, which is in the middle of a horrific epidemic that has killed more than 2,000 people.

He said: "I have mixed memories, some great memories and some horrible memories - lots of people dying.

"But also some wonderful memories of people going home, people showing massive spirit and cheer, despite the horrible conditions, the truly heroic people that I worked with, people that went on to get sick, so it is a massive mix of memories."

He told how he went to bed feeling sick and was woken by a World Health Organisation doctor in personal protective equipment (PPE) - a protective suit - after the tests came back positive.

"He was in PPE so I knew it was bad news," Mr Pooley said.

"It was a bit disturbing to get that diagnosis but I had been half expecting it because I had been feeling sick."

He added: "I was worried about my family, I was scared."

Mr Pooley said coming out of the isolation tent at the hospital had been a "special moment".

He said he would be heading home to East Anglia to recuperate with friends and family after being discharged.

Asked whether he would be returning to Africa, he said he currently had no plans to do so, adding: "They incinerated my passport so my mum will be pleased to know I cannot go anywhere at the moment."