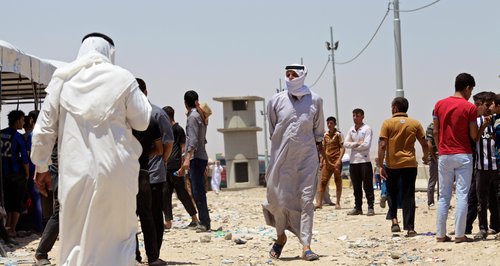 Police are looking into whether a 17 year old girl from Lambeth and a 15 year old from Bristol have travelled to Syria to join extremists there.

The pair vanished last week amid fears they have been radicalised.

Police are investigating whether the pair travelled together from Heathrow Airport to Istanbul on their way to Syria.

Louisa Rolfe, assistant chief constable of Avon and Somerset Police, said: "We can confirm that a 15-year-old student from Bristol has travelled to Turkey and we understand she may be attempting to make her way to Syria.

"Since she was reported missing by her parents we've carried out extensive work to trace her footsteps from the time she left home to her arrival in Istanbul, Turkey."

The teenager from London, who is from a Somali background, was last seen at around 7am on September 24 when she left her home.

Ms Rolfe said the priority for police is finding the 15-year-old before she crosses the border from Turkey to Syria.

"We're giving every support we can to her family; we want to find out where she is and encourage her to return safely.

"Our officers are working closely with the Metropolitan Police and their network of international liaison officers to find her.

"There are indications she may have been radicalised but at the moment our priority is to find her before she crosses the border to Syria and make sure she is safe.

"We must all be vigilant and ready to spot the signs of radicalisation.

"Often, young Muslims who go to Syria hold can be naive and don't recognise that they are being sucked into joining extremist groups.

"This is not about criminalising these young people, it's about preventing tragedies."

A spokeswoman for the family of the missing 15-year-old urged her to return home and told ITV News she is "incredibly bright, articulate and popular".

Local councillor Hibaq Jama said the teenager had left for school as usual on the morning of her disappearance but was not there when her father went to collect her that afternoon.

Her family are "absolutely devastated", she said, adding: "They are distraught."

Ms Jama read a message on behalf of the family which said: "Please come back. We miss you very much. You are not in any trouble. We just want you to be safe and to come home as soon as possible."

Neither of the missing girls has been publicly named by police.

Two police officers were standing guard outside The City Academy, Bristol, where the missing 15-year-old is a pupil.

The officers said they had been asked to attend the secondary school to protect pupils from media attention.

A spokeswoman for the school said she was unable to comment on the girl's disappearance.

"The school will not be commenting on this, any statements will come from the police," she said.

Lawrence Hill, where the girl is believed to live, has the highest number of Somalians outside of London in the UK.

The girls' disappearance follows that of twins Zahra and Salma Halane, 16, from Manchester, who are thought to have travelled to Syria in July.

British authorities have expressed increasing concern about hundreds of UK-born would-be jihadis who have gone to join Islamist forces in the Middle Eastern state.

Today Home Secretary Theresa May said she has so far removed the passports of 25 Britons trying to get there, while 103 people have been arrested in relation to terrorism in Syria.

Of those arrested, 24 have been charged and five convicted.

Anira Khokhar, a spokeswoman for the family of the Bristol schoolgirl, described her as an "intelligent, beautiful young lady" and described reports she was heading to Syria as "speculation".

"The family have lost a daughter and that is the most important thing here," she told reporters outside the girl's home in the Easton area of the city.

"The daughter is missing and we need to all ensure that we respect the family at this particular point in time.

"They are just a family whose daughter is somewhere they are unaware of and she is in danger.

"The family is very distraught but I think they are far more upset that the media is camping outside their house.

"They can't go outside, they have little kids in there. We have to ensure that as a British community we all come together and unite and protect those young kids.

"They are a very small, tight, Somali family and they are very reserved. They have a lot of the Somali community coming to support them in all this."

Ms Khokhar said the Somali community was supporting the girl's family and the priority was to find her.

"At the moment it is speculation and all these words flying around in the media... jihadist, radicalisation, extremism... there is no proof at present," she said.

"The last thing they want to see about their sister is words such as 'jihadist bride' or 'radicalisation' and 'extremism' - that's not the case at this present moment.

"It doesn't matter what religion or race you are, there is a girl that is missing and we have to ensure that she is in safe hands and we are going to protect them.

Ms Khokhar added: "With regards to her family she is an intelligent, beautiful young lady who is being missed by her family and that's all that matters at this present moment."