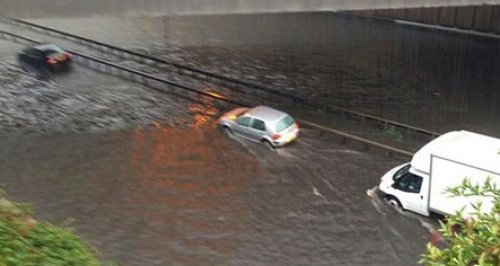 Homes and roads in west London were left flooded on Monday 28 July 2014 after nearly a month's rain fell in the space of a morning.

The A40 was closed both ways at Hillingdon after the rain left the road under floodwater waist-deep.

London Fire Brigade rescued two women from a car which got stuck in flood water near South Ruislip station. Another two people were rescued from a stranded car in Eastcote Avenue in Harrow, the fire service said.

Twenty houses were also affected by flood water in Bedford Road, Ruislip, while up to 1ft of water flooded a ground floor flat in Northolt Road, Harrow.

Forecasters warned that a "deeply unstable airmass" had brought the risk of heavy thundery showers across East Anglia, the South East and London throughout the day.

A lightning strike sparked disruption for rail passengers during the morning rush hour, while firefighters rescued people from homes and cars hit by floods.

The lightning hit an electricity sub-station near Hove in Sussex, causing power to the coastal rail route to be cut, according to a Network Rail (NR) spokeswoman.

It caused delays to journeys between Worthing and Hove and Brighton, which were expected to last into the afternoon. Meanwhile trains were not calling at Worthing station in the Hove direction due to flooding in a subway.

Firefighters rescued five people from three neighbouring houses which were flooded, while a road in the town collapsed from the heavy rainfall, it said.

An East Sussex Fire and Rescue Service spokesman said Brighton crews had dealt with a "large number of weather-related emergency calls", including flooding and lightning strikes. Morning commuters posted descriptions on Twitter of heavy hail and localised flooding caused by the storms.

Laurence Hill wrote: "Used to be roads. Now rivers of hail. Never seen anything like it." Brighton and Hove Police posted: "Localised flooding in Hove and Portslade, some roads not passable. Please do not enter flood water on foot or in cars."

Brighton station tweeted: "At a stand west coastway #Worthing #Brighton Both ways due to zombie apocalypse."

South West Trains said Woking-bound trains would not be calling at Esher, Hersham or Walton-on-Thames because of flooding.

A Southern Water spokeswoman said: "Torrential rain fell across Sussex this morning which has led to parts of our sewer network becoming overwhelmed by the sheer volume of water entering it. "We are doing all we can to help customers affected by this."

Sussex Police warned drivers to be careful as flash flooding hit Worthing, West Sussex, and Portslade and Mile Oak on the outskirts of Brighton and Hove. Brighton and Hove City Council's headquarters also had to close after the basement flooded due to the heavy rain.

The Met Office issued a "yellow" warning of rain - meaning there is a "moderate risk" - for East Anglia, the South East and London. Up to 43mm (1.7in) of rain - more than half the average monthly total for England in July - fell in an hour in part of Suffolk this morning, a spokeswoman said.

Chief forecaster Steve Willington said: "A deeply unstable airmass will cover south eastern areas of England on Monday. The main risk of disruptive downpours is now early this morning, with only a very low risk during the afternoon period.

"These heavy showers and thunderstorms may become focused into slow-moving narrow bands, meaning that whilst some areas experience locally intense downpours giving 25mm within an hour and very locally 40mm within two to three hours, adjacent areas could stay dry."

The Environment Agency issued a flood warning - meaning flooding is expected - for the Kidbrooke stream at Forest Row, East Sussex.

It said: "Heavy, thundery showers will continue to bring a chance of some localised surface water flooding issues, especially in urbanised areas, across much of south-east England today, with a risk continuing into the early hours of tomorrow morning in the far south east."

Darron Burness, head of the AA's flood rescue team, said: "Although the flash flooding was forecast, it's more difficult to predict the actual impact on the ground and unfortunately some people this morning found out the hard way that drains struggle to cope with such large deluges.

"Don't risk driving down a flooded road as just a tiny amount of water can wreck your engine - three-quarters of flood-damaged cars are written off. It's far better to turn round and find an alternative route."

East Sussex Fire and Rescue Service (ESFRS) said nearly 300 calls were received within a few hours. A further 60 calls had to be passed to colleagues in Cambridgeshire as the storms swept in, causing a surge in 999 calls.

Des Prichard, ESFRS's chief fire officer, praised the "swift and effective response" of his staff during the deluge. A spokesman for Gatwick Airport said: "Due to severe thunderstorms across the South East today, there are some delays and cancellations to flights at Gatwick and other airports.

"Gatwick has extra staff and volunteers assisting passengers in the terminals with information and welfare as required.

"We ask passengers to check with their airlines for the latest flight information before they travel to the airport." A spokeswoman for Luton Airport said two flights had been diverted there after being unable to land at Gatwick due to bad weather.