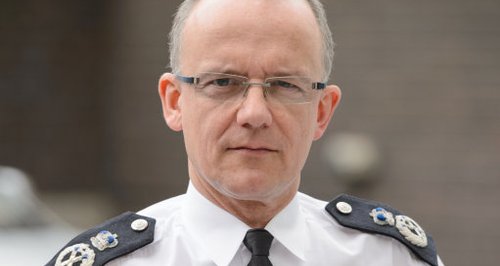 The Met Police say they're arresting five times as many people over terror offences in connection with Syria as they did last year.

The head of counter terrorism in the UK, Assistant Met Police Commissioner Mark Rowley (pictured), has asked for the public's help to identify aspiring terrorists.

He also says "significant progress" is being made in the hunt for the apparently British murderer of American journalist James Foley.

Islamic State terrorists posted a video online last week of the horrifying murder of hostage Mr Foley at the hands of a killer who spoke with a British accent.

Mr Rowley said: "Every reasonable person in the country has been touched by the pitiless murder of James Foley at the hands of Islamic State terrorists, and the murderer's apparent British nationality has focused attention on extremism in the UK as well as the Middle East. Investigators are making significant progress."

He appealed to family members and friends of aspiring UK terrorists to come forward, stressing that nearly half of would-be jihadis identified as part of Syria-linked investigations had not previously been classed as dangerous.

In the first half of this year 69 suspected extremists who planned to travel to Syria or fund terrorism there were arrested, and five times as many suspects are being arrested now compared to 2013.

Mr Rowley said: "High priority operations, especially against those involved in attack planning or on the cusp have increased greatly. Port stops and cash seizures have grown by over 50% as we strive to disrupt terrorists.

"The biggest growth in Syrian-related investigations has occurred in London and the West Midlands. The growth of dangerous individuals poses challenges for policing, especially when nearly half of Syria travellers of concern were not known as terrorist risks previously.

"Hence, we appeal to the public to help identify for us aspiring terrorists - they may be about to travel abroad, have just returned or be showing signs of becoming radicalised."

Mr Rowley said the force is also trying to prevent hate crimes here that may be sparked by events abroad, for example anti-Semitic offences related to Gaza and crimes against Muslims over the actions of Islamic State.

He added: "There is a lot at stake. In addition to the public assistance in identifying potential terrorists, we all need community and religious leaders to continue to speak out against warped narratives and we need everyone to ensure that public debate does not give oxygen to the terrorists by giving them the publicity they seek."

Earlier this month Scotland Yard chief Sir Bernard Hogan-Howe warned it cannot be predicted when potential terrorists might decide to return to the UK from countries such as Iraq and Syria, and police are preparing in case of an influx.

It is estimated that around 500 Britons have travelled to Syria to fight alongside extremists there, of whom around half are thought to be from London.

However, during a visit to India Deputy Prime Minister Nick Clegg rejected calls for tougher measures to combat the threat posed by returning British jihadists.

London Mayor Boris Johnson said he wants Mr Foley's murderer to be killed in a bomb attack and joined the growing calls for Britons fighting abroad to be stripped of their citizenship.

But Mr Clegg said: "We actually have a number of measures already on the statute book which allow us to keep a very close eye on those people who aren't in prison, aren't sentenced, but nonetheless are perceived to be a threat to the United Kingdom.

"And of course, we will continue to review all the powers on the recommendation of the police and security services that may be deemed to be necessary to deal with this very serious issue.

"I sometimes wish it was as simple as Boris Johnson implies: all we need to do is pass a law and everything will be well."

Writing in his Daily Telegraph column, Mr Johnson said those who "continue to give allegiance to a terrorist state" should lose their British citizenship, and called for swift changes to the law so there is a "rebuttable presumption" that those visiting war areas without notifying the authorities have done so for a terrorist purpose.

He wrote: "Young men such as this killer are famously told that if they die in 'battle' they will be welcomed in heaven by the sexual ministrations of 72 virgins.

"Many of them believe it - even though scholars have suggested that the reference to 'black-eyed virgins' is in fact a promise of 72 raisins.

"I suspect most of us don't give a monkey's what happens to this prat in heaven, whether he meets virgins or raisins - we just want someone to come along with a bunker buster and effect an introduction as fast as possible."