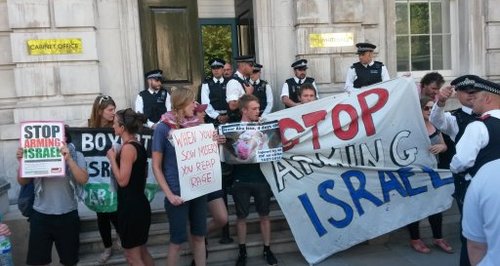 A group of pro-Palestinian demonstrators had to be ejected from the Cabinet Office after staging a protest against Israeli military action in Gaza this afternoon.

The group, who call themselves London Palestine Action, posted photos on their Facebook page of a handful of demonstrators linking arms as they sat in the lobby of the Whitehall building at around 4.30pm.

A spokesman for the Metropolitan Police confirmed they had attended at around 4.30pm and nobody was arrested before the group moved on.

The group, who have previously staged flashmob demonstrations in the capital, describe themselves as "a network of people in London taking creative action against Israeli apartheid through BDS (boycott, divestment and sanctions) and other effective, participatory Palestine solidarity work".

It comes before a national march and rally by the Palestinian Solidarity Campaign (PSC) in central London tomorrow.

The march will form up in Whitehall from midday before making its way through the city to a static rally in Kensington High Street.