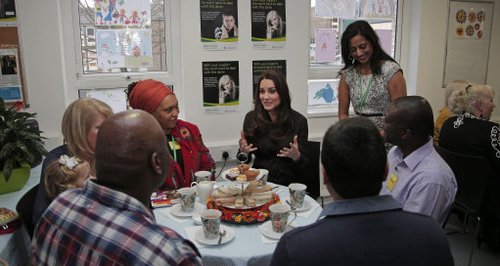 The Duchess of Cambridge has had cupcakes and chocolate brownies with children and their foster carers at a reception in north London.

Kate spent the morning chatting to parents who have welcomed children and teenagers into their homes at a critical moment in their lives.

Jim Bond, president of the Fostering Network which organised the fact-finding day for the Duchess, said: "She was overwhelmed by what she saw and heard. She was very moved and impressed with it all."

Many of the families she met have fostered children for many years, looking after a range of ages, with some staying a few days while others many years, effectively becoming members of the family.

There was a lighter moment during the event, held at the offices of Islington Fostering Services in north London, when the Duchess became smitten with one cute baby fostered to a single mother.

Kate smiled at the rosy-cheeked gurgling girl called Naya and compared the six-month-old to her son, telling her foster mother "she's chubbier than George".

Naya's hair was tied up in little bunches with coloured bands and the Duchess moved closer and said: "Sweetie pie, I love your hair."

She was held by single mother Tigest Tesfamichael, from Islington, who has been looking after the little girl for the past four months.

The 45-year-old, who has a 12-year-old son and is fostering a teenager, said: "I like to work with children so that's why I decided to take up fostering, I enjoy it, it's a fantastic job.

"It's just so positive - it's good for your family and good for the foster children."

The Duchess, who is six months pregnant, looked stylish in a silk brown Hobbs dress that showed a hint of her baby bump.

At the start of the visit she joined a round table discussion with foster carers, and young people who had been fostered, and before sitting down told the group: "I've heard a huge amount about fostering, it's really great for me to have an opportunity to speak to you."

Kate met the baby when she sat down to a mid-morning tea break with some of the foster families and the children they are looking after.

Kate moved around the room joining groups at tables that were laden with finger sandwiches, cup cakes and chocolate brownies.

Mr Bond, president of the Fostering Network, has fostered more than 80 children and young people over more than 20 years.

In a speech at the end of the visit he highlighted the current state of fostering: "Every day over 63,000 children and young people live with around 52,500 foster carers. These young people often experience neglect and abuse or witness domestic violence or parental substance abuse.

"Foster carers provide stability, security, safety and nurturing together with the love needed to help children grow through into adulthood as secure individuals well prepared for the future.

"But there are not enough of them, right now there is a need for at least 8,600 foster families across the UK."

Before leaving Kate was given a memory box containing mementos of her visit - a book of stories and poems written by former foster children, and more stories written by youngsters who are still being fostered.

She told the invited guests: "Thank you everybody, it's been wonderful to hear your stories."