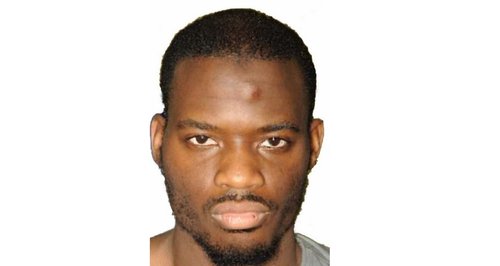 Michael Adebolajo - one of the Islamic fanatics found guilty of the murder of soldier Lee Rigby in Woolwich - has lost the first stage of his bid to challenge his conviction and sentence.

The Judicial Office has confirmed that permission to appeal was refused by a judge who considered the case on the papers, but that Adebolajo has renewed both applications.

This means that his applications will now be aired before a panel of Court of Appeal judges at a hearing in London.

Adebolajo, who was convicted at the Old Bailey along with fellow extremist Michael Adebowale, was sentenced in February to a whole-life term, which condemns him to die behind bars.

Adebowale, 23, who was jailed for life with a minimum term of 45 years for his role in the murder, has been given the go-ahead to challenge his sentence before Court of Appeal judges.

The British-born Muslim converts ran 25-year-old Fusilier Rigby down in a car before hacking him to death with a meat cleaver and knives in a frenzied attack.

They dumped the body of the father-of-one in the middle of the road near Woolwich Barracks in south east London in May last year.

Adebolajo and Adebowale lay in wait near the barracks and picked Fusilier Rigby to kill after assuming he was a soldier because he was wearing a Help for Heroes hooded top and carrying a camouflage rucksack.

After driving into him, the killers - who had armed themselves with eight knives, including a meat cleaver and a five-piece set bought by Adebolajo the previous day - butchered him in the street in broad daylight in front of horrified onlookers.

Both men were shot by police in dramatic scenes captured by CCTV.

They claimed they were ''soldiers of Allah'' and were motivated by the plight of Muslims abroad to carry out the killing.

Explaining his decision to give Adebolajo a whole-life term, trial judge Mr Justice Sweeney said the married 29-year-old, who has two children and four stepchildren, was the leader of the murderous plot and had "no real prospect of rehabilitation".

However, Adebowale's younger age, mental health problems and "lesser role" meant that he escaped spending the rest of his natural life behind bars.

Whole-life terms came came under the spotlight earlier this year when leading judges at the Court of Appeal ruled that murderers who commit the most "heinous" of crimes can be sent to prison for the rest of their lives.

Those currently serving whole-life terms in England and Wales include Moors Murderer Ian Brady, who tortured and murdered children along with accomplice Myra Hindley, and serial killer Rosemary West.

No date has yet been fixed for the hearing of Adebowale's appeal bid or the renewed applications by Adebolajo.