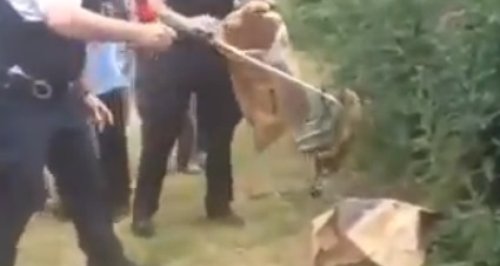 Officers were filmed trying to catch the boa constrictors from some bushes after they were spotted by locals in Plashet Park, East Ham, which has a large children's play area.

The reptiles are not poisonous, although they are dangerous, as they kill their prey by coiling around it and squeezing.

Scroll down for video

The snakes were taken to a pet shop following the brave rescue operation by PC Simon Furia, who used a stick to lift the reptile into a paper bag.

Watch video of the rescue