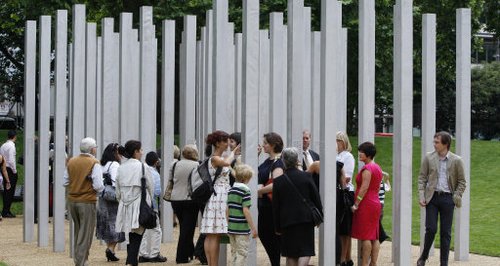 Police are investigating a picture that's emerged online appearing to show two men urinating on the Hyde Park memorial to the victims of the July 7th London bombings.

The men were seen standing next to two of the 52 stainless steel columns in the memorial commemorating each of the victims of the 2005 attacks on London's transport system.

The image, posted on Reddit, was reportedly taken during the British Summertime Festival in the park on the night of Friday 4 July. It was revealed after graffiti was discovered on the memorial in the early hours of Monday 7 July, just hours before bereaved families and survivors gathered for a ceremony marking the ninth anniversary of the atrocities.

Staff from the royal parks and Transport for London were able to clean off the red and black graffiti in time for the ceremony.

The event included a minute's silence in honour of the dead, the reading of their names and the laying of flowers at the base of each column of the memorial.

In a remark posted on Reddit, a user commenting on the image of the two men, said: "I'm not justifying their actions at all but do you reckon they even know this is the 7/7 memorial?"

But a spokeswoman for the Royal Parks said: "We ask all visitors to be respectful of their surroundings and considerate of other park users."