Roadsweeper Cleans Up On Lotto 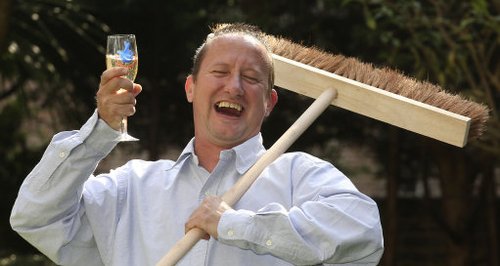 A roadsweeper from Camden who has won £4.5m on the lottery has finally quit his job after initially not believing he had won.

Joseph Whiting checked his tickets at 4am the morning after the draw on Wednesday 17 September 2014 but turned up to clean the streets in north London as usual.

The 42-year-old, who banked the windfall of £4,570,887 with a ticket bought nine minutes before the deadline, told his bosses he was hanging up his broom on Monday 22 September.

He said: "I woke up and checked the numbers on teletext at four in the morning and I saw all six numbers.

"I couldn't believe it. I didn't have my glasses on so I put them on and checked two or three more times."

He said he informed his mother, who he lives with in Camden, north London.

"She said 'give over, it's too early in the morning for jokes like that'."

After telling his mother not to throw the winning ticket away, he reported for his 5am shift.

"I still didn't believe it," said the father of three.

"I don't know how I got through the day. My mind was all over the place. You can check 100 times and you are still not sure."

Finally he got home and contacted Camelot, who confirmed the win.

He said: "Even then and now it hasn't sunk in."

He quit the job he has done for 14 years today, leaving the brooms behind.

"My line manager was made up for me," he said.

Mr Whiting almost missed out when a relative offered to buy a load of bread, meaning he did not need to go to the shop.

He decided to buy a ticket at the last minute at around 7.15pm - 15 minutes before the draw closes.

"It must have been fate, I shouldn't have gone out, and still don't know why I got up and decided to go."

Now he is planning to use his winnings to take driving lessons, buy a bigger house and go on holiday with his children - two girls and a boy - with a trip to Disneyland possibly on the horizon.

He is also keen on a season ticket to follow his beloved Arsenal but admitted: "I think there's a bit of a waiting list."