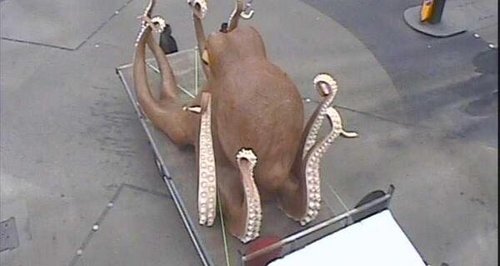 A betting company have said sorry after a lorry carrying a giant polystyrene octopus broke down at Oxford Circus during the morning rush-hour.

The eight legged creature became stranded just after 9am on Tuesday 3 June 2014, causing delays around the busy Oxford Street and Regent Street.

The octopus was being transported through London after being used by online betting company Betfair.

Transport for London's advice was to "approach with care".

The Octopus was later moved out of the way and Betfair apologised for any inconvenience caused by the prop, which is being used for an upcoming ad campaign.