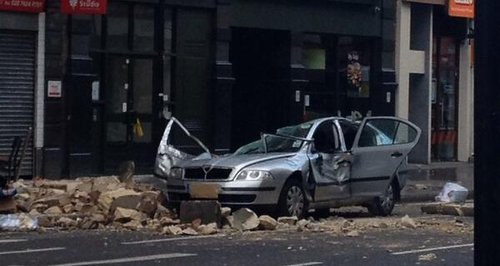 The husband of a taxi driver killed when part of a building fell on her car in Holborn has told an inquest he had told her to stay off work because it was so windy.

Mum of three Julie Sillitoe died on Valentine's Day 2014 when her taxi was crushed by falling masonry. She had refused to stay off work because she said she needed to buy him a birthday present.

Her two passengers narrowly escaped with their lives after the chunks of cement fell just centimetres from their heads, the inquest heard.

Her widower, security consultant Steve Sillitoe, choked back tears as he told St Pancras Coroner's Court, how he pleaded with his wife not to go to work because of the bad weather.

But she shrugged off his concerns and went out to work as normal at around 8pm.

He said: "She came up and said 'I'm going to go to work now'. It was very windy outside, it was bad weather. I said to her 'Do you have to go to work? Why don't you take the night off?'

"She said 'I have to go to work, I have to buy your birthday present'."

Mr Sillitoe later sent his wife a text saying he loved her, and she complained that it was very windy.

That night she picked up a young couple in her taxi at Gordon Ramsay's restaurant Bread Street Kitchen in the City.

But as they drove through High Holborn shortly after 11pm masonry large pieces of cement fell from a building, crushing her Skoda Octavia.

Ms Sillitoe, from Finsbury in north London, had to be cut from the wreckage but attempts to resuscitate her failed and she died at the scene.

Shortly after 1am in the morning police knocked at Mr Sillitoe's door to deliver the devastating news.

He paid tribute to his "fun loving" wife, who was looking forward to becoming a grandmother for the second time.

He said: "She was extremely family orientated - with her granddaughter and her sons. Shortly before she learnt that (her son) Ben's partner was pregnant again with a girl, which she was overjoyed at."

He added: "It is a number of months since Julie was killed, and every single day I miss her very much."

Luke Fitton told how he and his fashion blogger girlfriend Bo Houtenbos had been on their way home after enjoying a romantic Valentine's Day dinner out when the rubble hit their taxi.

He told the inquest: "Quite instantly I felt I had a huge piece of concrete on me, and it just seemed to go from absolute silence and normality to the complete opposite.

"I didn't understand what was going on. I was conscious, I was screaming and screaming because the pain was so blinding."

A large piece of concrete landed on his chest, crushing him, the inquest heard.

Paramedics, police and an air ambulance rushed to the scene and he was cut out of the wreckage and treated.

But Ms Sillitoe was not so lucky and she suffered "devastating" head injuries which killed her.

Mr Fitton's voice became quieter as he spoke about the impact the tragedy had on him and his girlfriend.

He said: "For myself and my girlfriend, it has changed our lives so much in terms of appreciation that we were lucky in that situation.

"It makes you reflect and we are saddened that all three of us weren't able to come away from this experience."

Mr Fitton, who has only just come off crutches because of his injuries, added: "Having no way of rationalising how something like this can happen. You are not expecting to be worried about travelling home and buildings falling out of the sky."

He said he was still waiting for answers about why the accident happened.

He said: "People seemed to initially respond saying it was an Act Of God. I feel that is a bit of 'We can't explain what happened'. I feel there could have been a lot more done.

"That was the last of a few days of bad wind. If you were concerned with your building it should be checked and maintained."

Through tears, Mr Sillitoe asked if he thought his wife's death would have been sudden.

Looking at the family sat in the front row of court, Mr Fitton said: "I think it would have been instant.

"It landed within centimetres of my face. It was just so overwhelming there is no way it could have been anything other than that."

The inquest, which is being heard by a jury of four men and seven women, continues.