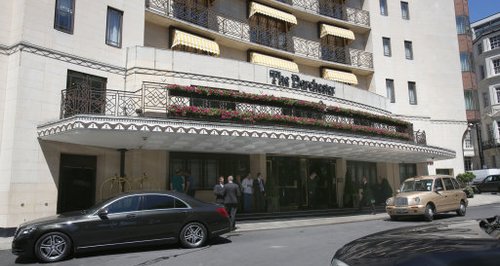 Two men have been charged by detectives investigating a smash and grab raid by a moped gang on London's Dorchester Hotel.

Unemployed brothers Reed Roberts, 23, and Skye Roberts, 19, were due to appear at Wimbledon Magistrates' Court in London on Saturday 12 July 2014 in connection with the robbery at the five-star hotel on Thursday 10 July.

The plush Mayfair venue was hit for the second time in a month by a moped-riding gang who smashed their way into the building in the early hours of the morning and broke into display cabinets.

The luxury hotel was hit in exactly the same way on 10 June, when watches and jewellery were stolen in what police called a "well-planned" heist.

Reed and Skye Roberts, of Cubitt Street in King's Cross, north London, are both charged with robbery and possession with intent to supply a Class B drug.

Two men and a woman arrested by the Flying Squad at a house in King's Cross on Thursday 10 July have been released on bail until September, a Metropolitan Police spokesman said.